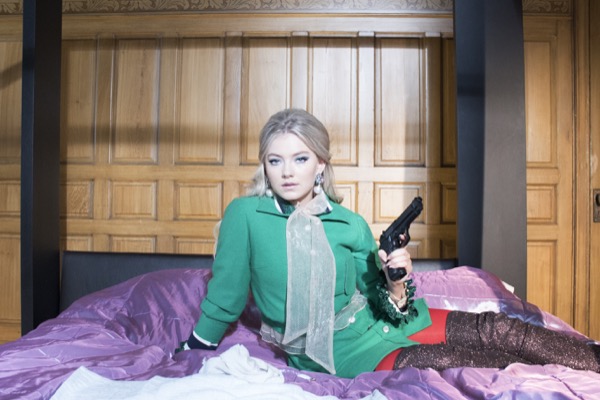 Norwegian award-winning pop star Astrid S has revealed the video for her latest single ‘Breathe’. The video sees Astrid as part of a vigilante couple who commit a heist in a Tarantino-esque, action-packed short film format.

Astrid S says: “This is the biggest music video I’ve done yet! There was a big crew, a lot of equipment and effects, not to mention all the costumes and clothes! I think the video manages to capture the edge and sassiness of the song, with a good mix of serious and funny. I’m so excited to share it!”

“The backbone of the music video is retro-nostalgia, where we move in and out of decades following the two main characters and their journey through time. Our main inspiration for the story were retro action movies such as the cult classic James Bond films from the 60’s, as well as 70’s road movies, Tarantino-esque characters and Americana influences in general. We wanted to play with pastiches in all aspects: famous movie scenes, interiors, fashion and cliché characters.”

‘Breathe’, which was released earlier this month, is the first new music to come from Astrid this year – with more to come in 2017. The single surpassed 3 million streams within the first few days of its release, with The Line Of Best Fit regarding the track as “Majestic…her biggest pop moment yet”.

Last year was a breakthrough year for Astrid S with the release of her acclaimed debut self-titled EP. Wonderland Magazine called the single ‘Hurts So Good’ “heartrending and euphoric”, with Noisey dubbing the track “clearly excellent”. The Guardian described Astrid as “waiting in the wings of global stardom”, and she was named as one of the acts most likely to save pop in 2017 in the 2016 Popjustice Readers’ Poll.

This year Astrid S won the Norwegian Grammy for ‘Breakthrough Artist Of The Year’ for her ‘Astrid S EP’. She has also previously been awarded ‘Best Norwegian Act’ at the MTV European Music Awards.

Astrid S has also recently announced she will be performing a run of highly-anticipated shows this Spring including a headline show at London’s prestigious venue Scala on May 23rd. Full live schedule below.

May 16th – The Studio at Webster Hall, New York, USA

‘Breathe’ is out now across all digital outlets. More music from Astrid S will follow this year.