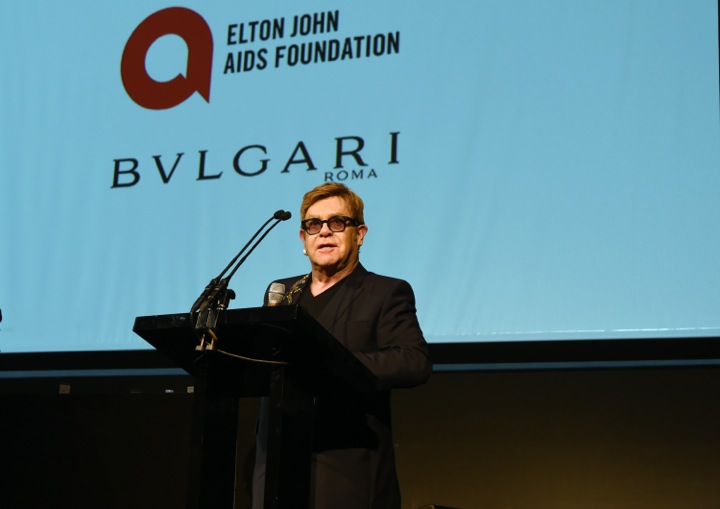 Hosted by Elton John and David Furnish, the evening began with an intimate private view of the highly lauded exhibition of Modernist photography from the Elton John Collection, ‘The Radical Eye’, before welcoming guests at an intimate drinks reception and 3 course dinner.

A series of inspiring addresses were delivered throughout the night about the Elton John AIDS Foundation and their work to fund and enable frontline programmes that help to alleviate the pain – whether physical or emotional – of those living with, affected by, or at risk of HIV/AIDS.

Elton John said: “I was so thrilled and honoured to see two of my great passions come together in one night: the magic of photography and the humanity of the fight against AIDS. It was a special occasion.”

Mark Dybal, Executive Director of the Global Fund for AIDS, TB and Malaria (The Global Fund) also took to the stage, speaking of the critical role the Elton John AIDS Foundation plays in the global fight against AIDS, both for global advocacy and in the work they fund. Speaking at the event, Mark Dybal said: “The Elton John AIDS Foundation’s contribution to the fight against AIDS is extraordinary, and Elton and David’s advocacy is truly unique.”

Following the dinner and private view, the event continued late into the night, with special guest Craig David taking to the decks at the after party to rapturous response. He performed hits including Rewind and Walking Away, alongside TS5 set including Justin Bieber and Whitney Houston tracks.

Bulgari’s involvement in the evening continues the jewelers three year partnership with the Elton John AIDS Foundation which was officially launched at the EJAF Woodside Gallery Dinner in June 2016. Speaking of the jewelers continued commitment to the Foundation, Jean-Christophe Babin, CEO of BVLGARI, said: “BVLGARI believes in making the world into a better and beautiful place. This is the reason why earlier this year we signed an important partnership, over the next three years, with the Elton John AIDS Foundation, an organization that we respect for its high level of integrity and ethics. It is an honour to be part of the EJAF family and it is an absolute pleasure to host the Radical Eye gala alongside Elton and David, and continue this wonderful journey we started together.”

Speaking on behalf of the Elton John AIDS Foundation on World AIDS Day 2016, Anne Aslett, Executive Director said: “It’s been an honour to welcome so many fantastic supporters of the Elton John AIDS Foundation to The Radical Eye Private View and Dinner this evening to mark World AIDS Day 2016. Alongside our sponsor BVLGARI, we’ve proudly hosted a truly memorable occasion; tonight our supporters showed true love and compassion – which is what we need to end AIDS.”

The world’s first ever global health day, initiated in 1988 – World AIDS Day is held on the 1st December each year to enable worldwide communities to unite in the fight against HIV, show their support for people living with HIV and to commemorate those who lost their lives to the worldwide pandemic.

ABOUT THE ELTON JOHN AIDS FOUNDATION:

The Elton John AIDS Foundation (EJAF) believes AIDS can be beaten by raising funds for evidence-based programs and policies, and by speaking out with honesty and compassion about the realities of people’s lives. Sir Elton John created EJAF almost 25 years ago, first in the United States in 1992 and then in the United Kingdom in 1993. Through hard work and with the help of its generous friends and supporters, the two foundations together have raised more than $350 million over the past quarter century to combat stigma, prevent infections, provide treatment and services, and motivate governments to end AIDS. The U.S. foundation focuses its efforts on programs in the United States, the Americas, and the Caribbean, while the U.K. foundation funds HIV-related work in Europe, Asia, and Africa. Join them in speaking out, taking action, and contributing to their efforts to achieve a world without AIDS. For more information, please visitx www.ejaf.org

Jeweller, watchmaker, designer and philanthropist, BVLGARI is a name emblematic of Italian excellence. Emboldened by 2,700 years of Roman history, BVLGARI honours its rich past with modern designs. Known for stylistic audacity and a penchant for colour, BVLGARI pieces are immediately recognizable. Designing with the sensuality of volume, a love of linearity and a reverence for the art and architecture of BVLGARI’s Greek and Roman roots, these iconic features are found in each of BVLGARI’s creations. Harmonized with Rome’s ancient history, BVLGARI incorporates the city’s symbolism while innovating its design for the future. Classic yet contemporary, BVLGARI upholds its 130-year legacy with a timeless sense of exquisite beauty. www.BVLGARI.com