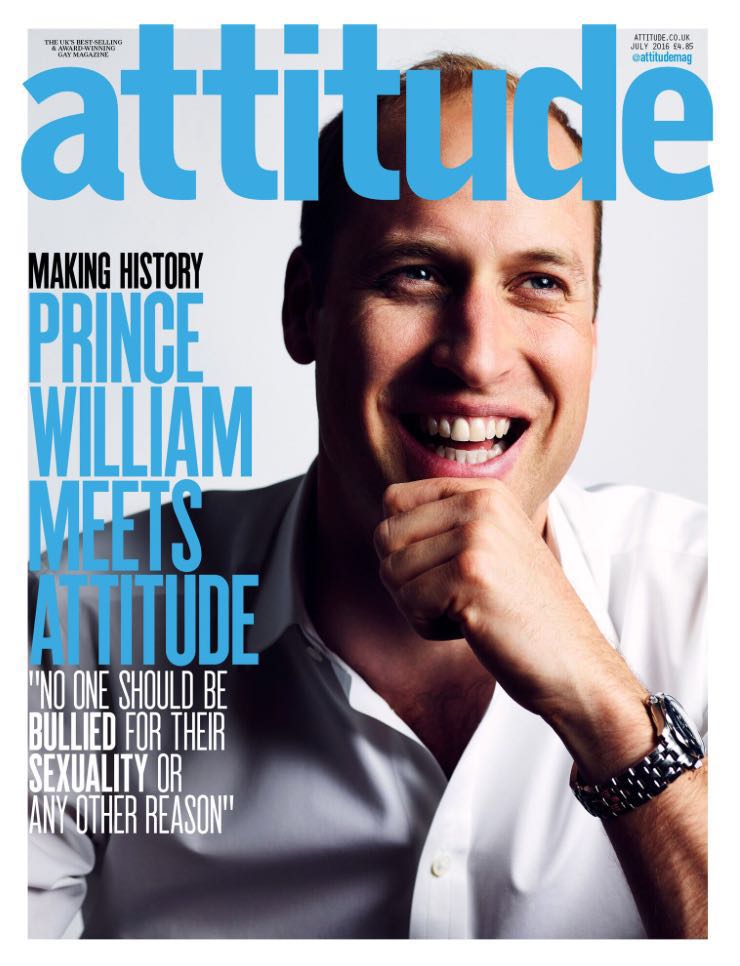 PRINCE WILLIAM MET WITH ATTITUDE AND 9 MEMBERS OF THE LGBT+ COMMUNITY TO DISCUSS THE MENTAL HEALTH RAMIFICATIONS OF HOMO, BI AND TRANS PHOBIC BULLYING

On Thursday 12th May 2016, His Royal Highness The Duke of Cambridge invited Attitude magazine to bring members of the LGBT+ community to Kensington Palace to listen to their experience of bullying and the mental health impacts it can have. The discussion was facilitated by Attitude editor Matthew Todd.

LGBT+ Individuals explained how bullying had led to low self-esteem, suicide attempts, eating disorders, depression and drug addiction including, in one case, the death of a young man after an unintentional overdose. HRH then posed for the cover of Attitude photographed by Leigh Keily.

Speaking to Attitude, The Duke commented: “No one should be bullied for their sexuality or any other reason and no one should have to put up with the kind of hate that these young people have endured in their lives. The young gay, lesbian and transgender individuals I met through Attitude are truly brave to speak out and to give hope to people who are going through terrible bullying right now.  Their sense of strength and optimism should give us all encouragement to stand up to bullying wherever we see it. What I would say to any young person reading this who’s being bullied for their sexuality: don’t put up with it – speak to a trusted adult, a friend, a teacher, Childline, Diana Award or some other service and get the help you need. You should be proud of the person you are and you have nothing to be ashamed of.”

Matthew Todd, Editor, Attitude Magazine commented: “During my time as editor of Attitude I have met parents whose child has taken or lost their life after being bullied for being LGBT+ or even just perceived to be LGBT. I am very happy that the future King of The United Kingdom agrees this must stop and I would urge parents in particular to raise their voices in their communities to ensure that every school protects – really protects – all children.”

A Kensington Palace spokesman said: “The Duke of Cambridge is working hard to support the fight against bullying and to help break the stigma around mental health. He has established a taskforce on the prevention of cyberbullying and along with The Duchess of Cambridge and Prince Harry is leading the Heads Together campaign on mental health and well-being.

“He knows that LGBT young people suffer unacceptably high rates of bullying and he was grateful to Attitude for facilitating such a serious conversation on this topic. He was moved by the stories he heard and impressed by the positivity and courage of the people he met.”

This issue of Attitude magazine went to press on Wednesday 8th June, just days before the devastating shooting in Orlando which saw 49 LGBT+ people lose their lives. Attitude sends our most heartfelt condolences to those affected by this atrocity. Around the world LGBT+ people experience hatred and violence every day. Such violence does not exist in a vacuum but snowballs from intolerance and bullying that begins in classrooms, too often comes from politicians, religious leaders and is often not treated with respect by the media.

Publication of any image, video or text related to this story is acceptance of Attitude’s photography terms and conditions which can be found in the image folder.

1 image plus the Attitude cover are available for immediate use and can be found here https://www.dropbox.com/sh/j5yoy8ejxui66bc/AABnJ-ErzPYlESYxFfaKOkv2a?dl=0