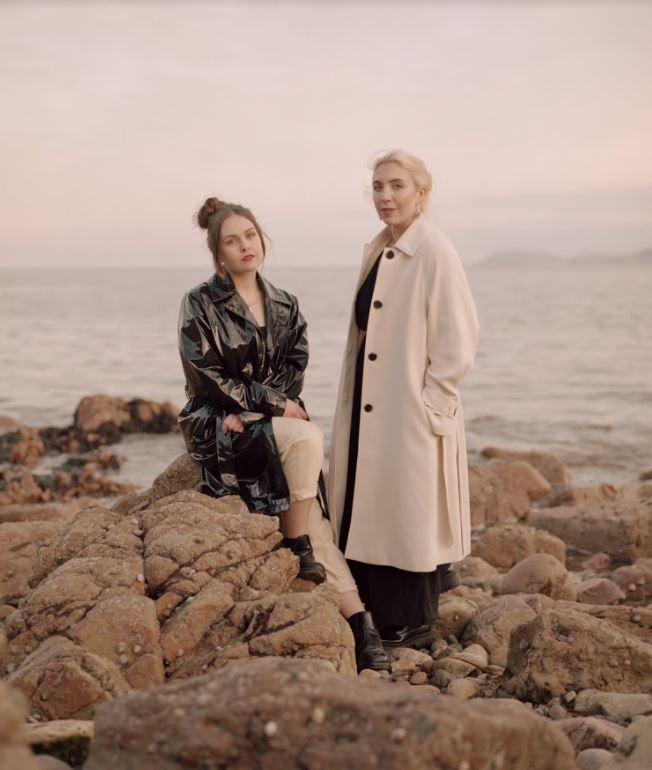 Saint Sister—the Dublin-based duo of songwriter Morgan MacIntyre and harpist and producer Gemma Doherty—today reveal their new song ‘Manchester Air’, the fifth single from their forthcoming second album ‘Where I Should End’, out June 25, and announce a 13 date tour of the UK and Ireland.

‘Manchester Air’ was written in the weeks leading up to the 2018 referendum on the Eighth Amendment in Ireland, which had effectively acted as a ban on abortions in the Republic. Until its repeal by a historic, landslide majority, the act had forced generations of Irish women to travel to the UK mainland to access abortion services.

Inspired by the Irish pro-choice movement, the song reflects a young couple’s journey to Manchester facing an unexpected pregnancy. With an ethereal, acapella intro, the song builds into a haunting folk melody reflective of these time-worn journeys. MacIntyre explains that the song “harks back to the old Irish ballads of leaving home, the constant tramp of the Irish across the water”.

The duo performed the song for the first time on the weekend of the referendum, on Inis Oírr, the smallest of Galway’s Aran Islands. Reflecting on the historic moment the Act was overturned, MacIntyre recalls “Writing this song felt like a cry for help. The weekend the results came through we celebrated by screaming into the sea, feeling the weight of it all wash off us. We performed the song for the first time that weekend and it no longer felt like a cry for help, but rather a cry for every woman who was betrayed by the state and simultaneously a cry of relief, a nod to the future.”

A live performance video of ‘Manchester Air’ is also released today. Directed by Ellius Grace, the film sees Saint Sister perform an intimate, acapella version of the song by the Dublin waterside. The band have also released the first “Stories Behind The Songs” for Manchester Air, a series where the band narrates their experience writing and recording each song on the album. These were also directed by Grace and shot on 16mm film.

‘Manchester Air’ follows ‘Karaoke Song’, ‘Dynamite’ and ‘The Place That I Work’ featuring Lisa Hannigan and most recent single ‘Oh My God Oh Canada’. All five singles will be featured on Saint Sister’s forthcoming album, ‘Where I Should End’. An incredibly hands-on project, every track on the new album has been written, arranged and produced by the band – seeing Morgan and Gemma confidently evolving into their distinct roles as songwriter and producer. Layering synths and drum machines with harp, strings (performed by Crash Ensemble), piano, and other live band components, ‘Where I Should End’—recorded at The Meadow Studio, Co. Wicklow with Rian Trench and mixed in Berlin with Benedikt MacIsaac—opens new sonic avenues for Saint Sister, while showcasing their most honest songwriting to date.

Hailing from the north of Ireland, MacIntyre and Doherty met in Dublin in 2014, before going on to release their debut EP ‘Madrid’ the following year. ‘Where I Should End’ follows their debut album ‘Shape of Silence’, which received critical acclaim and nominations for Album of The Year at both the 2018 RTE Choice Music Prize and the Northern Irish Music Prize.

Following its release, Saint Sister toured extensively through Europe and the U.S., including their biggest stateside tour to date with Keane in 2020, unfortunately cut short due to COVID-19. The band have also supported Hozier and Lisa Hannigan on their international tours, and filmed a debut NPR Music Tiny Desk Concert. Speaking of the concert, NPR’s All Things Considered host Bob Boilen said: “Saint Sister makes the sort of music I’ve been fascinated with for much of my life, music that mixes the organic with the electronic…That blend is at the heart of my passion for Saint Sister.”

‘Where I Should End’ is now available for pre-order. Listen to ‘Manchester Air’ here. Tickets for the tour go on sale Tuesday 1st June 2021, 10:00am BST, available from www.saintsisterband.com