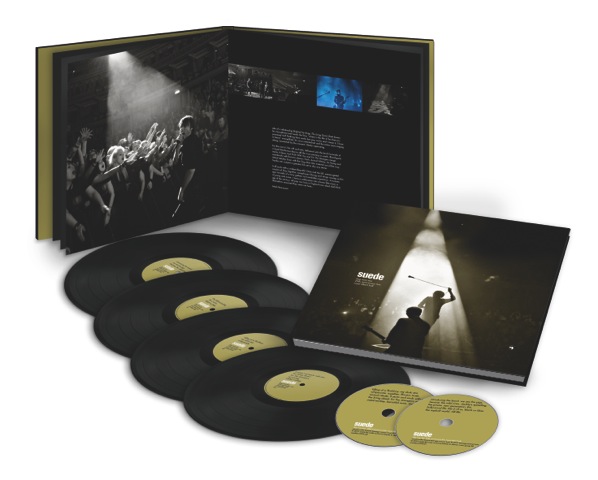 THE TWO HOUR CONCERT WILL NOW APPEAR ACROSS 4 12” LPs AND TWO CDs, PRESENTED IN A LARGE PHOTO-ALBUM STYLE BOOK CONTAINING 32 PAGES OF PHOTOGRAPHY FROM THE CONCERT. THE PERFORMANCE WILL ALSO BE AVAILABLE ON A SINGLE CD – BOTH FORMATS WILL BE RELEASED ON SEPTEMBER 4TH.

Suede release two very special editions of the 2-hour benefit show that the group played last year at London’s Royal Albert Hall to celebrate the 20th anniversary of their iconic album “Dog Man Star. The show, one of the best the group have ever played, featured the whole of “Dog Man Star” from start to finish plus, for the encore, 4 B-sides from the era and a selection of other greatest hits. It was a benefit show for Teenage Cancer Trust.

Limited to 2,000 copies, the box set will be presented on four 12” LPs and two CD’s. It will be released on September 4, 2015 through Edsel Records. Brett Anderson has written a special note to commemorate the releases, which appears in a large photo-album style book containing 32 pages of stunning photography from the show.

The track listing for the vinyl is as follows:

1. It Starts and Ends With You

The performance will also be available on a single CD featuring the main ‘Dog Man Star’ show without the encore.

The original album received huge praise on release in October 1994 with NME writing; “A startling record; an album surrounded by the white heat of something close to genius”. Q wrote that the album “will be hailed in years to come as the crowning achievement of a line-up that reinvented English guitar rock n roll for the 1990’s”.

Since then the album has grown in stature to the degree that 2013 saw it voted in the top 40 of the 500 Greatest Albums Of All Time in NME.

Pre-Order from the below –