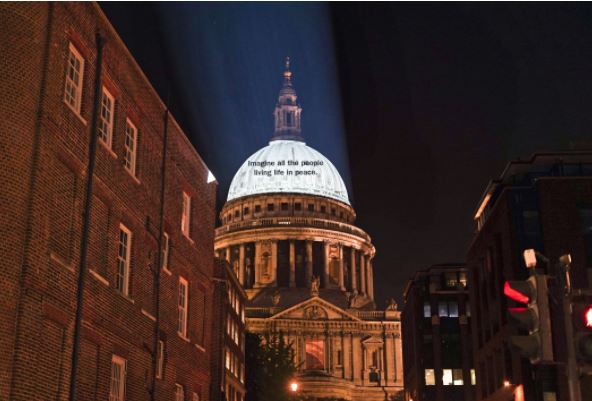 THIS EVENT IS CELEBRATED WITH THE CLASSIC LYRIC “IMAGINE ALL THE PEOPLE LIVING LIFE IN PEACE” PROJECTED ONTO VARIOUS LANDMARK BUILDINGS AND SITES AROUND THE WORLD.

IN LONDON THE HOUSES OF PARLIAMENT AND ST PAUL’S CATHEDRAL HAVE BEEN ILLUMINATED; THE SAME MESSAGE WAS PROJECTED ON TO THE LIVER BUILDING AND THE LIVERPOOL MUSEUM IN LIVERPOOL, THE BERLIN WALL, TIMES SQUARE IN NEW YORK AND A SITE NEAR THE JAPAN BRIDGE IN TOKYO.

First released in 1971, the iconic track has become one of the most recognised and popular global anthems for peace and has been covered by more than 200 other artists including Neil Young, Madonna, Elton John and Lady Gaga. Most recently it was re-imagined by Hans Zimmer in the dazzling opening ceremony of the 2021 Tokyo Olympics, watched by an audience of hundreds of millions.

In celebration of the song’s power and resonance on this 50th anniversary, the most poignant and well-known lyric from the track has been projected on to equally iconic buildings and sites around the world.

“IMAGINE ALL THE PEOPLE LIVING LIFE IN PEACE” has appeared as a digital projection on the Houses of Parliament and St Paul’s Cathedral in London and on the Liver Building and the Museum of Liverpool in John’s home city.

It has also appeared on the Berlin Wall and on digital billboards in Times Square in New York and near the historic Nihonbashi bridge in Tokyo.

These projections echo a similar billboard campaign Yoko undertook 20 years ago when exactly the same wording was used in prominent sites around the world.

Yoko Ono Lennon said today; “John would have loved this. ‘Imagine’ embodied what we believed together at the time. We are still together now and we still believe this. The sentiment is just as important now as when it was written and released 50 years ago”.

To celebrate the 50th anniversary of the Imagine song, album and film, on September 10, Capitol/UMC will release a Limited Edition pressing of the “Imagine” album as a Double LP, exclusively on white vinyl. This Collector’s Edition features the acclaimed 2018 Ultimate Mixes of the album, produced by Yoko Ono Lennon and mixed by triple Grammy Award winning engineer Paul Hicks, with a host of out-takes, including the original demo for “Imagine”. 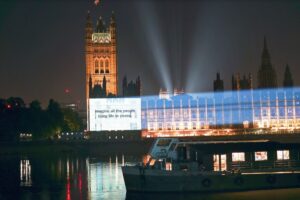