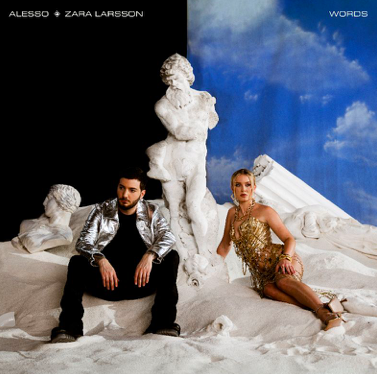 Today, dance artist and producer Alesso joins forces with pop phenomenon Zara Larsson for a brand new single called ‘Words’. Out now via 10:22PM / Astralwerks (Positiva/EMI in the UK), ‘Words’ is accompanied by a high-concept video. Listen to ‘Words’ HERE, and check out the video HERE.

A triumph from the two Swedish powerhouses, ‘Words’ is written by the global superstars along with Karen Poole (Kylie Minogue) and recent Brit-Award winning songstress Becky Hill. The song merges Alesso’s dynamic sound with a magnetic vocal performance from Zara. With its arranged layers of beats, the high-energy track takes on an intensity as Zara confesses to a fear of vulnerability in love – ‘Words’ serves as an anthem for owning your fear and following your heart.

Directed by Jason Lester (a filmmaker/photographer known for his work with artists including Julia Michaels and Lauv), the video for ‘Words’ finds Zara as a goddess in gold and white among statues from the past. As the visual unfolds, Alesso soon emerges in a shadowy yet neon-lit industrial space. Shot on film, the result is a collision of futurism, classicism, fashion, and rave culture. Alesso searches for Zara leaving the industrial darkness behind and stepping into the light.

‘Words’ follows the release of Alesso’s recent singles ‘Only You’ and ‘Dark’(a moody and kinetic piece handcrafted for ‘THE BATMAN’). As the latest high-profile collaboration from Alesso, the new single drops just months after the GRAMMY®-nominated artist teamed up with Katy Perry on ‘When I’m Gone’ — an explosive track that soon saw him making his ‘Saturday Night Live’ debut alongside the global pop superstar and a troupe of mushroom dancers.