THE AWARDS CELEBRATE THE UNFORGETTABLE, UNIQUE AND UNSUNG MUSIC IMAGES OF 2021 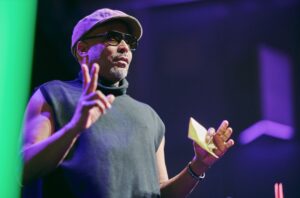 Abbey Road Studios, the world’s most famous recording studio has tonight confirmed the winners from its inaugural Abbey Road Studios Music Photography Awards 2022 in association with Hennessy, following a glittering awards ceremony at the studios this evening. As well as a celebration of the shortlisted and winning imagery hosted by Matt Everitt, the evening also saw a series of fantastic live performances from Mysie, The Clockworks and Hak Baker.

In the awards’ open categories, the winner of Championing Scenes supported by Hennessy, is Northern Irish photographer Megan Doherty, best known for her debut book ‘Stoned In Melanchol’ which documents her adolescence in Derry, while the winner in the Live category supported by Philips, is John Lyons with an image of David Mrakpor playing with Ruben Fox. In Studio Photography, supported by Bowers & Wilkins, Jack McKain wins with a shot of Pink Siifu, while Chris Suspect wins with a shot of metal band Darkest Hour in the Zeitgeist category and Joe Puxley’s shot of Arlo Parks wins in Undiscovered, supported by adidas.

In the invited categories, the winner for Artist At Work is the black music specialist, Greg Noire for a live shot of KennyHoopla, while Samuel Trotter wins in Editorial for a picture of Polo G and his son, with Yana Yatsuk’s image of King Princess winning the Portrait category.

‘Everyone at Abbey Road Studios is thrilled with the quality of the entries and winners in our first Music Photography Awards.  More broadly, we’re also incredibly encouraged by the way in which the MPAs has been embraced across the arts and creative landscape.  It’s been brilliant to create a platform to recognise emerging and established talent in this important field, and we’re already looking forward to doing it all again in 2023!’

Earlier this month, the MPAs announced the recipient of this year’s Icon Award as Eric Johnson. Best known for his work documenting the US music culture of the late ‘90s and early 2000s, his photos of Biggie Smalls, Nas, Missy Elliott, Lauryn Hill and the late Aaliyah defined an era of US music photography. His more recent work with the likes of Doja Cat and MPAs judge Shygirl places him at the heart of contemporary pop music culture in 2022.