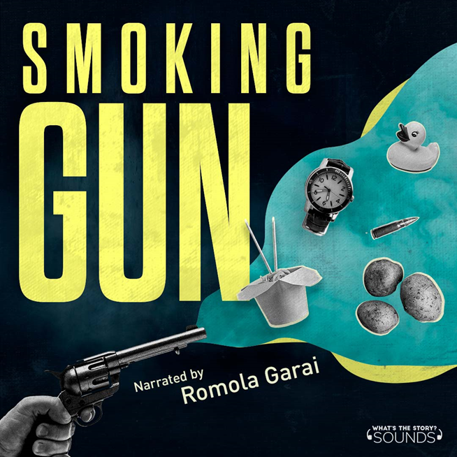 FIRST EPISODE AVAILABLE FROM TOMORROW, 20 MAY

In every murder case, there is a ‘smoking gun’ – an otherwise innocuous piece of evidence that can ultimately be the killer’s downfall. In this brand-new series narrated by actress Romola Garai and the head of the British Institute of Forensic Sciences, Tracy Alexander, listeners will hear how these key pieces of evidence – everything from a mosquito to a Chinese meal – have helped reveal the answers to previously unsolvable cases.

The first episode of ‘Smoking Gun’ will explore the case of Christopher Laverack, a nine year old child from Hull killed in 1984. Previously Humberside Police’s longest unsolved murder case, forensic experts were finally able to unlock the case more than twenty years later, through forensic evidence linked to a house brick found with his body.

Tracy Alexander says: “Forensic science is an often misunderstood discipline, and can be used in so many fascinating ways to identify suspects and provide the evidence for use in court. I’m thrilled to be a part of this series which can give listeners a real insight into how science is used to aid investigations – and reveal that no matter how clever or cunning a killer might be – there will always be some evidence of their crimes”

The first episode will be available on all streaming platforms from tomorrow, 20th May, with further episodes released weekly.

‘Smoking Gun’ will reveal the forensic secrets behind ten intriguing cases. Investigations explored in the first season include:

It’s the late 1930’s, and a team of workmen are busy constructing houses on a site in the East of Hull. The foreman is shouting instructions and watching intently. Little does he know that one of those innocuous, commonplace house bricks are going to be key – the smoking gun – in one of Yorkshire’s most notorious and complex murder enquiries.

Coastal path killer John Cooper thought he’d got away with a double murder, despite being the prime suspect. But when police re-opened the case, they were determined to leave no stone unturned. In this gripping tale, listeners will learn how a pair of bathing shorts became the smoking gun which led to justice.

The kidnap and murder of baby Charles Lindbergh rocked America. Finding Charles’ killer became one of the most high priority and extensive FBI and police investigations ever conducted, with pioneering forensic work uncovering that a home-made ladder was the smoking gun which unlocked everything.

Cassandra McDermott’s violent murder shocked her hometown of Croydon to its core. But who was responsible? Police began an intensive investigation… Could a Chinese takeaway prove to be the smoking gun which solved the case?

Leanne Tiernan was last seen walking into a dark and deserted wasteland by her friend. Later, her body was found, sparking one of the most extensive murder investigations West Yorkshire Police had ever seen. But how did a dog collar end up being the smoking gun which cracked the case?

When Diane Stewart died of an epilepsy related death, her organs including her brain, were donated to medical science. Years later – her late husband was found guilty of murdering his new fiancé. Police looked again at Diane’s death…and wondered if he may have been responsible for that too. But they had no way of finding out…until they learned that Diane’s brain was still in storage. Could a human brain be the smoking gun to solve the case?

Trevor Hardy is one of Britain’s least-known, but most-horrifying serial killers. A one man crime wave, Hardy was responsible for the brutal murders of at least three women. But how he evaded capture defies belief. Learn how a nail file became one of the most bizarre smoking guns in criminal history.

The deaths of Derek and Eileen Severs rocked the sleepy community of Hambleton, but the discovery of their bodies in a shallow woodland grave led to the most unlikely of clues. Join ‘Smoking Gun’ as we learn how a potato became the smoking gun which convicted a killer.

Jeffrey Robert MacDonald was born in the middle of the Second World War and became a US Army Veteran serving his country. But when his entire family were murdered in their own home, and Jeffrey was brutally attacked, police did everything in their power to determine the culprit. But how did Jeffrey’s pyjamas become the smoking gun which shocked everyone?

It’s 1947, and Danish carpenter Ole Kirk Kristianson is in his workshop, thinking up ways to keep his business running. And his new invention, lego bricks, will revolutionise the toy industry. But how do these small pieces of multicoloured plastic link to a brutal murder more than 5000 miles away from Ole’s workshop? How does a tiny lego brick become a smoking gun?

‘Smoking Gun’ is a podcast series produced by What’s The Story? Sounds.

ABOUT WHAT’S THE STORY? SOUNDS

Whether it’s an ‘always on’ or a long-form narrative boxset, What’s The Story? Sounds produce compelling, factual and high-production value content. With a mission to always get under the skin of a story.

WTSS work with a range of suppliers – Spotify, Audible, NBCU, Amazon, Podimo, BBC Sounds – while also self-publishing a range of projects they feel particularly passionate about.

Series in their portfolio include: ‘Body of Proof’ which reached #1 in the Audible-UK bestseller chart and #2 in the US; Spotify original, ‘Emily Atack: Lie Detector’ which debuted at #3 in the charts; the exclusive to BBC Sounds show, ‘The Footballers Football Podcast’ and ‘The Missing’, an award-nominated series that has reached over 2.3 million listeners to date.