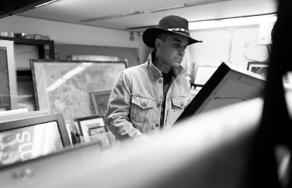 “Art is really whatever you want it to be. Just like music it has the ability to soothe and provide company when you’re lonely. Art and music have punctuated my ups and downs, but more importantly they both have the power to change how I feel in a moment.”
Robbie Williams

“I have realised that a creative brain is one of the most valuable tools to be born with. I create art and can spend hours discussing art with Robbie because we have similar brains, which are in no way combative, just progressive and full of ideas the WHOLE time.”
Ed Godrich

20 April 2022, London: Robbie Williams (@robbiewilliams) and his creative partner, Ed Godrich (@edgodrich) will put their stamp on Sotheby’s in London this Spring. A collaboration in two parts, the artist duo will first bring a fresh perspective to this season’s ‘Contemporary Curated’ auction (22-28 April, 2022), before opening their debut exhibition, ‘Black and White Paintings’, at Sotheby’s New Bond Street galleries.

Together they have selected their favourite pieces from the ‘Contemporary Curated’ sale, including both the most established names and several emerging artists. Their choices were made with the intention of shining a light on creators who have inspired their own art practice, and to help introduce a new generation to the world of collecting in a sale with estimates starting at £1,000. As part of the ‘Contemporary Curated’ sale Robbie and Ed are including one of their own works, Beverly, in the auction (est. £15,000-20,000). This will be the very first time one of their paintings has been for sale.

‘Black and White Paintings’ will feature 14 never-before-seen works, marking the first time their paintings have been displayed publicly. The exhibition will open to the public from May 13-25, 2022 during London Gallery Weekend – a three-day free event across London, celebrating art galleries in the UK capital (13-15 May, 2022).

A partnership built on, in their own words, “friendship, communication, respect and trust”, Robbie and Ed immediately bonded over a love of Abstraction and Outsider Art, as well as music, which encouraged them to create together as an artist duo. Robbie said: “Ed’s and my outlook on life and sensibilities are eerily similar. In music terms, Ed plays the piano, while I write the melodies and the words. To continue the metaphor, we also write songs separately and bring them together. We’re in a band.”

In five years, they have created a body of work with an aesthetic deeply rooted in a nostalgia for the 1990s rave and music scene: vibrant, euphoric and pulsating with life. Speaking about their practice, Ed stated: “Our paintings take on the rhythm of whatever is playing – and that’s usually electronic music. Everyone will see something different in each picture, whether that’s the influence of the music playing at the time, or something else. Perception is key and while there is joy in them, there are also some darker undercurrents too.”

Beyond music, the duo’s paintings also take inspiration from street art and indeed Robbie and Ed’s edit for this season’s ‘Contemporary Curated’ auction features a work on paper by Basquiat – a constellation of his signature markings – dating to 1988, just months before his untimely death (est. £100,000-150,000). An artist who also started their career in the eighties by graffiti-tagging in New York City was Richard Hambleton – referred to by Robbie and Ed as “the daddy of them all” – whose larger-than-life silhouette painting, Standing Shadow in Orange and Pink, is selected as part of their edit (est. £60,000-80,000).

Robbie and Ed also spotlight a work by Christo titled Over the River, which the artist created in preparation of his and Jeanne-Claude’s – his artist-and-life-partner – project for Arkansas River, Colorado in 2006 (est. £120,000-180,000). Speaking to Christo’s legacy, the duo said: “Anyone who conceived an idea involving the wrapping of a whole building in the early 60s is a true hero in our opinion. We think of Christo most days, so many everyday occurrences remind us of his work. This piece is subtle and can happily coexist within any collection.”

Over the River features alongside a cityscape by Edgar Plans (City at Midnight, est. £25,000-35,000), as well as an almost four-metre wide abstract triptych by Aaron Young (est. £15,000-20,000), and Banksy’s spray-painted Rat with Sunglasses (est. £150,000-200,000). Featuring on the cover of the street artist’s documentary, ‘Exit through the gift shop’, Robbie said: “It was Banksy’s documentary ‘Exit through the gift shop’ which made me realise Art is punk if you want it to be.” In March this year, Sotheby’s sold two works by Banksy for a combined total of £7.7 million as part of the inaugural ‘The Now’ sale in London from the musician’s collection.

With an affinity to the work of British artists, Ed & Robbie also chose an iconic 2010 spot painting by Damien Hirst ((2-Hydroxpyridine, est. £150,000-200,000), Henry Hudson’s Freedom of Speech (est. £18,000-25,000) and a glazed ceramic by Grayson Perry, portraying the artist stood atop his motorbike and lent against one of his signature vases, decorated with a further self-portrait (Him and Her est. £40,000-60,000).
“Music is the road to art for me. The first bridge I went across was Peter Blake because he did the album art to the Beatles’ Sgt Pepper’s album. I started collecting when I wrote Angels; that gave me the financial capacity to collect. For you burgeoning collectors, my advice would be to buy what you like – it hasn’t let me down. It’s important to engage with the art you buy, and you have to have an emotional reaction to the piece.”
Robbie Williams

“James Gould, a close friend and someone I respect, told me not to ‘magpie buy’. Save up and wait to buy something that you love and can’t live without.”
Ed Godrich

Further details on Robbie and Ed’s exhibition ‘Black and White Paintings’ will follow later this month, before the works go on public exhibition from May 13-25, 2022.