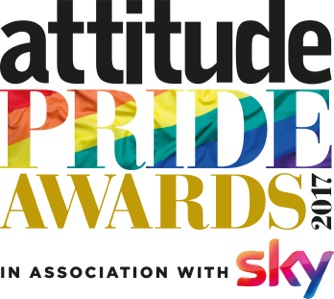 ATTITUDE MAGAZINE ANNOUNCES THE WINNERS OF THE ATTITUDE PRIDE AWARDS 2017

THE AWARDS, IN ASSOCIATION WITH SKY TO BENEFIT PRIDE IN LONDON, WERE HOSTED BY GOK WAN AT THE MANDARIN ORIENTAL HYDE PARK

The Attitude Pride Awards, in association with Sky to benefit Pride in London, returned today with a celebrity ceremony to award unsung heroes of the LGBT+ community at London’s luxury Mandarin Oriental Hyde Park hotel.

Hosted by TV personality, author and fashion consultant Gok Wan, the exclusive, invite-only lunch ceremony formally kicked off a weekend of Pride in London celebrations, whilst celebrating the lives of 10 incredible individuals who have made a significant contribution to the lives of the LGBT+ community.

The Attitude Pride Award winners 2017 are:

Martyn Hett, one of the 22 victims of the Manchester terrorist attack, was awarded posthumously to recognise how living life openly, honestly and being unashamedly proud of your sexuality is in itself a powerful form of activism. A huge fan of Coronation Street (Martyn had a Deirdre Barlow tattoo on his leg) the award was presented by Coronation Street actress Helen Worth and collected by Martyn’s sisters, mother and partner.

Dean Eastmond, recognised for his work in campaigning for equal fertility rights for men in same-sex relationships, raising awareness of issues around sexual assault, and his battle with cancer, was awarded by Radio 1 DJ Nick Grimshaw.

Former Attitude editor Matthew Todd was presented his accolade by Davina McCall in light of his work to encourage awareness of gay mental health and addiction – following the release of his book ‘Straight Jacket’.

Bernard and Terry Reed, founders of the Gender Identity Research Education Society, were awarded by Robert ‘Judge’ Rinder due to their work in support of their trans daughter, who experienced mental health issues due to gender discrimination and bullying.

Journalist Owen Jones honoured Brighton-based Keith Biddlecombe with an Attitude Pride Award. Keith, who was imprisoned for being gay, accepted the award on behalf of all the men who were imprisoned before the decriminalisation of homosexuality.

Channel 4 News’ Cathy Newman presented to Booan Temple, one of the activists from ‘Lesbians Against the Clause’, the group who famously gatecrashed a BBC News live broadcast and abseiled into the House of Lords in protest of Section 28, which specified that local authorities should not ‘promote’ or discuss homosexuality.

Author Juno Dawson presented to Natalie Scott, a transgender LGBT+ activist and support worker who continues to do significant and important work in raising the profile of trans issues in Scotland.

Awards host Gok Wan said: “It was an absolute honour to host the Attitude Pride Awards today on the eve of Pride in London. The team at Attitude have done a great job of recognising the achievements of these 10 incredible, truly inspiring people and highlighting their powerful stories.”

Darren Styles, Publisher/Managing Director of Attitude magazine, said: “When I bought Attitude last year, and became the first gay man to own the title, I made it a priority to bring back the Attitude Pride Awards. Aligning our brand with the values of Pride goes to the heart of who we are, and this very special lunchtime event on the eve of (and to benefit) Pride in London gives us the opportunity to honour unsung heroes and those whose life stories – for better and worse – provide hope and inspiration to us all. I am beyond grateful that Sky has enabled us to make this happen. The honours are truly ours.”

Stephen van Rooyen, UK and Ireland Chief Executive, Sky, said: “The Attitude Pride Awards are a fantastic opportunity to highlight some of the contributions that have been made to the LGBT+ community over the last year. We are delighted to support these awards and look forward to celebrating those who are making a difference in the community.”

Michael Salter-Church MBE, Co-Chair of Pride in London, said: “I am delighted to see the return of the Attitude Pride Awards in association with Sky. I think they’re such a positive thing to do – and the fact they recognise LGBT+ people from right across the country and those representative of our entire community is terrific. That we are the beneficiary is both an honour and the icing on the cake.”

A special edition of Attitude magazine featuring exclusive interviews with the 10 winners of the Attitude Pride Awards will be published on Thursday 19th July.

For videos of the winners please click here and here