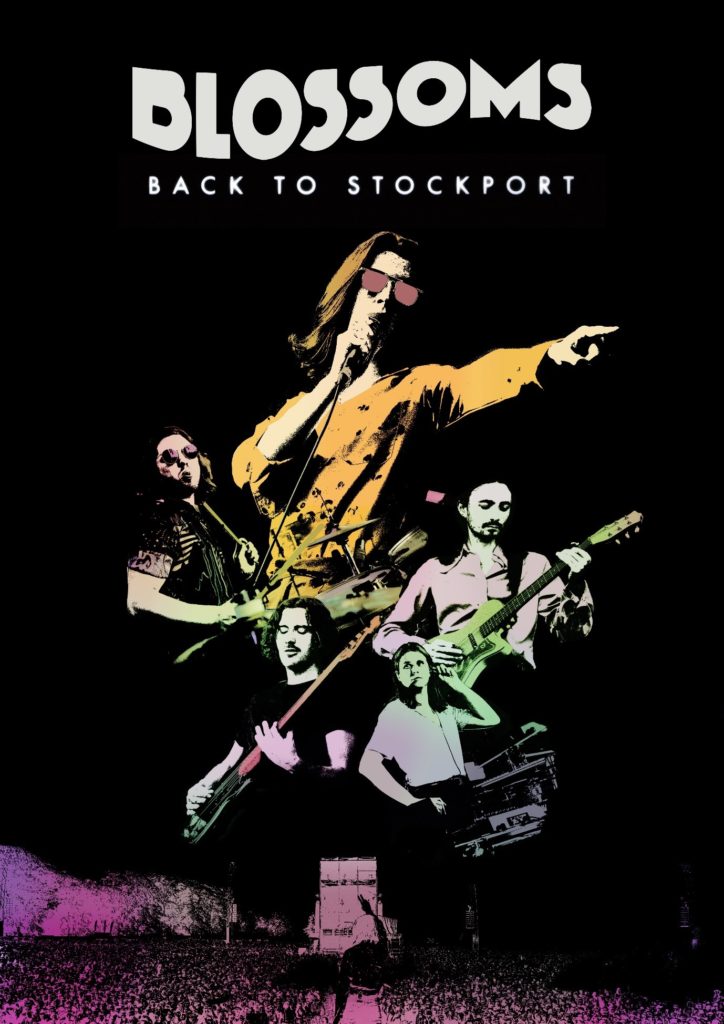 WATCH THE TRAILER FOR THE FILM HERE

Blossoms have today announced details of their brand-new, feature length documentary Back To Stockport, as well as releasing the first trailer from the upcoming film. Directed by long-term collaborator of the band Charlie Watts, Back To Stockport will be released on Amazon Prime Video on 8th November and will launch as a 24 hour premiere on YouTube on 7th November at 8pm GMT here.

Back To Stockport focuses on Blossoms’ headline show at Stockport County FC’s 15,000 capacity Edgeley Park stadium on 22nd June 2019. Alongside live footage of favourites from across the band’s catalogue, including I Can’t Stand It, Your Girlfriend, Blow, My Favourite Room, There’s A Reason Why (I Never Returned Your Calls) and Charlemagne, the film includes individual interviews with each band member, as well as extensive and candid behind the scenes access.

Speaking about the documentary, Blossoms say:

‘We’ve worked with Charlie on and off since the band started really, so when the opportunity to make something together surrounding the homecoming show in Stockport came about, we jumped at the chance. We think he’s really captured the spirit of the band, and being a friend, he was able to get the natural moments you don’t normally see in a band documentary. We love the film and hope you do too!’

‘This is a project that has been very close to my heart for the last 18 months. Given my personal relationship with the band and the town itself, it was hugely important to me that the film delivered!

I’ve been filming the lads since they started out, so it has been surreal to see their rise to such success – but not surprising! To be able to make a film about them playing to a sold-out show in our home tome of Stockport was something I’ll never forget. I think the film gives an intimate insight into the amazing bond and togetherness this band has. They grew up as best friends and it really does show on the screen’.

Blossoms new double album In Isolation/Live From The Plaza Theatre, Stockport charted at number 5 in the UK album chart last week, making the band the only act to have had two different albums in the top 5 this year, following January’s number 1 album Foolish Loving Spaces, which features singles The Keeper and Your Girlfriend. The band have now sold more than 300,000 albums in their career to date.

Since forming in 2013, Blossoms have enjoyed widespread success and acclaim. Their 2016 debut full length topped the album charts for two consecutive weeks and went on to earn the band BRIT Award and Mercury Prize nominations, while 2018’s Cool Like You charted at Number 4 in the UK album chart, spawning the anthemic singles I Can’t Stand It, There’s A Reason Why (I Never Returned Your Calls) and How Long Will This Last?

Back To Stockport will be released on Amazon Prime Video on 8th November and will launch as a 24 hour premiere on YouTube on 7th November at 8pm GMT.