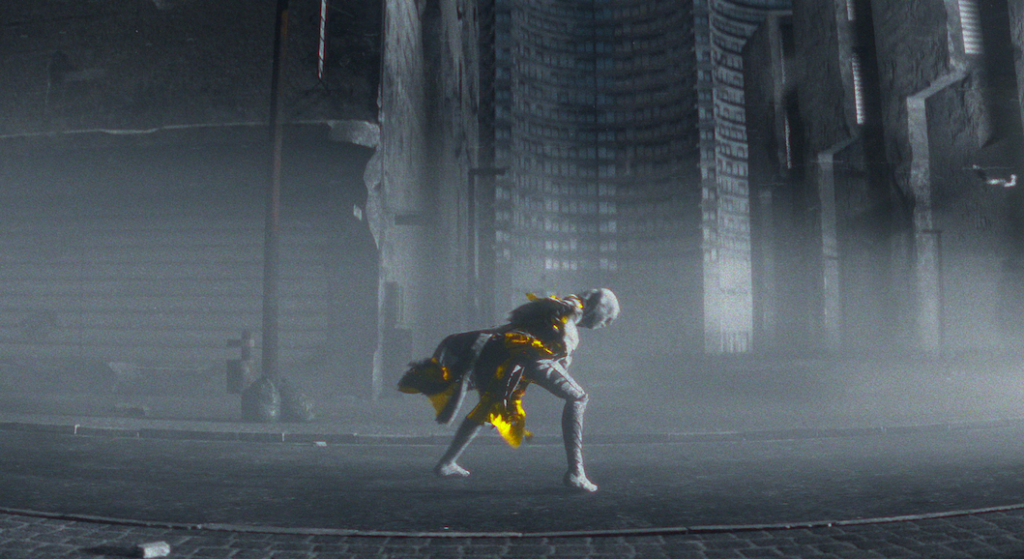 DIRECTED BY BALÁZS SIMON AND PRODUCED BY BLINKINK, THE STRIKING VIDEO FEATURES ANIMATION DEPICTING A STORY OF STRUGGLE AND PERSEVERANCE

Directed by award-winning Hungarian film-maker Balázs Simon and produced by London-based company Blinkink, the video depicts a dystopian urban landscape with abandoned streets and angular buildings. The viewer follows one woman’s journey as she battles against dark forces and harsh elements; emboldened by a desire to reach a brighter end, the hero ultimately discovers that the light she sought was harboured within all along. The cinematic animation evokes an uplifting message of self-reliance – a central theme of BRONSON’s self-titled debut album due out on 17th July on Foreign Family Collective/Ninja Tune.

On the creative process, Simon says: “As we couldn’t assemble a big team together due to lockdown, we needed a less conventional way of doing this, where all departments had to work separately – without really seeing the whole picture! We had to rely on our imagination. We went out to the empty streets of Budapest and shot camera moves without any subject, then we rehearsed movements in a park, did some motion capture, and from there we took the stay-at-home ordinances to heart – locking ourselves in for a couple of weeks and assembling all the collected data into this video. It was an intensive experience with an amazing team of talented friends, and it made our days much more bearable!”

Nearly three years in the making, BRONSON formed through the personal connection that Mills and Knight shared with Stell. Born out of a mutual admiration and a calling to pursue new creative frontiers outside of their respective projects, they created a digital record box of shared sounds sent across time zones and continents through Dropbox files and FaceTime calls. The product of their collective efforts culminated in 2018 when the trio spent a week in the remote region of Berry, Australia, recording what would later become their debut BRONSON album.

ODESZA and Golden Features have a combined streaming total which reaches the billions, and hold multiple gold and platinum singles and albums, respectively. Both acts have remixed and collaborated with an array of renowned artists including Sia, Charli XCX, Leon Bridges, Regina Spektor, Katy Perry amongst others. Both leaders in live shows, together they’ve reached millions of fans around the world on headline tours, with ODESZA selling out venues including London’s O2 Academy Brixton, Los Angeles’ Staples Center and New York’s Barclays Center, as well as headlining festivals such as Coachella, Bonnaroo, Austin City Limits, Outside Lands and Lollapalooza.

BRONSON’s debut album is available to pre-order now. Pre-save digitally and pre-order the physical LP at the official BRONSON store.

Full credits for the ‘HEART ATTACK (ft. lau.ra)’ video are: