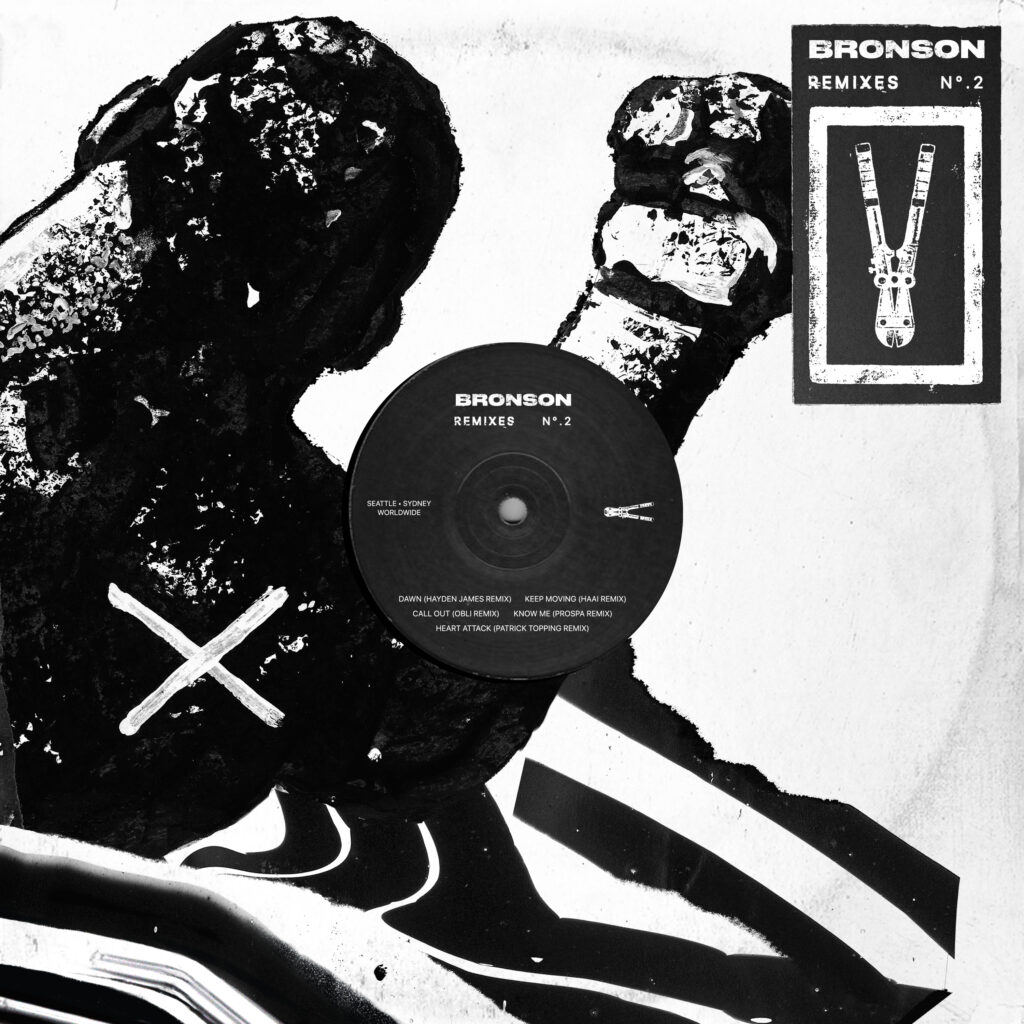 THE NEW EP FEATURES REMIXES BY HAAI, PATRICK TOPPING, PROSPA, HAYDEN JAMES AND OBLI AND IS OUT NOW ON FOREIGN FAMILY COLLECTIVE/NINJA TUNE

BRONSON have today released the second in a series of three remix EPs featuring reimagined tracks from their eponymous debut album.

‘Remixes Nº2’, out now on Foreign Family Collective/Ninja Tune, includes five reworks from an international array of influential producers – HAAi, Patrick Topping, Prospa, Hayden James and obli. Each remix delivers a more intense side of BRONSON’s sound, paying homage to the multifaceted underground soundscapes that have surrounded the trio – USA heavyweights Harrison Mills and Clayton Knight of ODESZA and ARIA-platinum artist Tom Stell of Golden Features – throughout their careers.

‘Remixes Nº2’ features progressive electronica – a combination of leftfield and club-inspired sounds which reinvigorate the original album. Opening with a take on ‘DAWN’, Hayden James reworks its soundscapes into a reverberating, hypnotic setting that centres on Totally Enormous Extinct Dinosaurs’ ethereal vocals. Female powerhouse and Australian DJ, HAAi, reconstructs ‘KEEP MOVING’ into an industrial composition tailor-made for the warehouse, celebrating the gritty backbone of the original track. Rising UK duo, Prospa, lend their classic rave-reminiscent touch to ‘KNOW ME’, while also adding a sense of modern, experimental nuance, steeped in off-kilter, distorted synths. Foreign Family Collective newcomer, obli, balances the EP with a soulful rendition of ‘CALL OUT’, bolstering the original with a funk-inspired guitar riff, while finally, house star Patrick Topping has created a powerful tech-fuelled re-work of ‘HEART ATTACK’, primed for the dancefloor with its retro synths and crisp percussion.

BRONSON on ‘Remixes Nº.2’ says: “This collection embodies the shared sentiment of nostalgia and longing for the late night landscapes and dance floors these works were crafted for. We are excited to share what these incredible artists have put together and want to give a special thanks to everyone involved.”

Indeed, ‘Remixes Nº2’ manages to unleash that electric energy, and in turn, incites a revitalising sense of hope and anticipation to experience those very same scenes in the near future.

BRONSON released their critically-acclaimed debut album in July 2020 earning widespread support from music tastemakers such as Zane Lowe, Pete Tong, John Digweed and Anja Schneider, reaching upwards of 56 million streams in just a few months after its release. A third and final remix EP will be released later this year to round out the series, including reworks from notable tastemakers and acclaimed producers including Riton, TSHA, Krystal Klear and more.

The ‘Remixes Nº.2’ tracklist in full is: