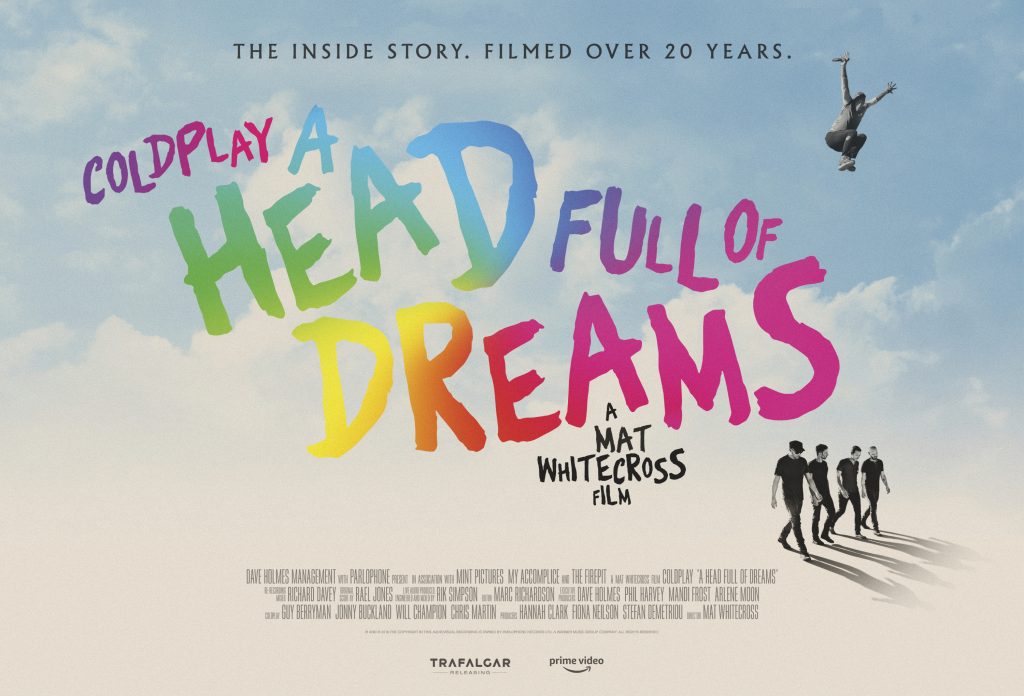 IN-DEPTH PORTRAIT OF THE BAND – FILMED OVER TWENTY YEARS – TO SCREEN ON AMAZON PRIME VIDEO FROM FRIDAY, NOVEMBER 16 AND IN CINEMAS WORLDWIDE ON WEDNESDAY, NOVEMBER 14

Coldplay have announced a new film, A HEAD FULL OF DREAMS, which throws the doors wide open on their colourful 20 year history. The film will be available to stream exclusively on Amazon Prime Video starting in the UK, US, Australia and New Zealand on Friday, November 16 with local language versions available globally soon after.

The documentary release will be preceded by a special one-night showing of the film in collaboration with Trafalgar Releasing in more than 2,000 cinemas around the world, on Wednesday, November 14. Tickets are on sale from Friday, October 19 from coldplay.film.

In conjunction with the launch of A HEAD FULL OF DREAMS on Amazon Prime Video, Coldplay will premiere three live tracks, available to stream only on Amazon Music beginning Friday, October 26. The tracks are: Stayin’ Alive (Live at Glastonbury) by Coldplay & Barry Gibb, Us Against The World (Live in Leipzig) and Don’t Panic (Live in Paris).

A HEAD FULL OF DREAMS offers an in-depth and intimate portrait of the band’s spectacular rise from the backrooms of Camden pubs to selling out stadiums across the planet.

At the heart of the story is the band’s unshakeable brotherhood which has endured through many highs and lows.

The film is helmed by Mat Whitecross – director of Supersonic, the acclaimed 2016 Oasis documentary – who met the four friends at college in London, before they’d even formed the band. From the very first rehearsal in a cramped student bedroom, Whitecross has been there to capture the music and the relationships on tape.

Whitecross has since directed many of the band’s most iconic videos (including Paradise, A Sky Full Of Stars and Adventure Of A Lifetime) and continued to document the band’s musical and personal evolution.

Using extensive unseen archive, behind-the-scenes and live footage, A HEAD FULL OF DREAMS sees the band reflect upon their two decades together. It was filmed during Coldplay’s record-breaking A Head Full Of Dreams Tour, which was certified as the third biggest tour of all time, playing to more than 5.5 million fans across the world.

Notes to Editors
About Prime Video
Prime Video is a premium on-demand entertainment service that offers customers the greatest choice in what to watch – all with the ease of finding what they love to watch in one place.

Included with Prime: Watch thousands of popular movies and TV shows, including award-winning Prime Originals such as The Grand Tour, Tom Clancy’s Jack Ryan, The Marvelous Mrs. Maisel and Sneaky Pete, Academy Award-winning Manchester by the Sea and The Salesman and Academy Award-nominated The Big Sick; plus exclusive TV shows like American Gods, Preacher and Mr Robot; live sport and self-published content. All part of Prime Video, which is now available in more than 240 countries and territories worldwide.
Watch More with Prime Video Channels: Prime members can add 60+ channels like Discovery, ITV Hub+, Eurosport Player, hayu and more— no extra apps to download; no long term contract required. Only pay for the ones you want, and cancel anytime. To view the full list of channels available, visit www.amazon.co.uk/channels.
Rent or Own: Hundreds of thousands of titles, including new-release movies and TV shows available for all Amazon customers to rent or buy at any time
Instant Access: Instantly watch anytime, anywhere through the Prime Video app on TVs, mobile devices, Amazon Fire TV, Fire TV Stick, Fire tablets and Apple TV or online. For a list of all compatible devices visit www.amazon.co.uk/watchanywhere.
Enhanced Experiences: Make the most of every viewing with 4K Ultra HD and High Dynamic Range (HDR) compatible content. Go behind the scenes of your favorite movies and TV shows with exclusive X-Ray access, powered by IMDb. Watch anywhere with mobile and tablet downloads for offline viewing.

In addition to Prime Video, the Prime membership includes unlimited fast free delivery options across all categories available on Amazon, more than two million songs and thousands of playlists and stations with Prime Music, secure photo storage with Amazon Photos, unlimited access to a rotating selection of thousands of books and magazines with Prime Reading, unlimited access to a digital audiobook catalogue with Audible Channels for Prime, a rotating selection of free digital games and in-game loot with Twitch Prime, early access to select Lightning Deals, and more. To sign-up for Prime or to find out more visit: www.amazon.co.uk/prime.

Amazon Music reimagines music listening by offering customers over 50 million songs and thousands of curated playlists and stations at the tip of their fingers as well as the tip of their tongue – using Alexa voice control on Echo and Alexa-compatible devices.

Since its launch in 2006, Trafalgar Releasing (formerly operating as Picturehouse Entertainment) brings special events to the big screen around the world. Our music slate includes Muse: Drones World Tour, Sophie Fiennes’ Grace Jones: Bloodlight and Bami, David Gilmour Live at Pompeii, Roger Waters The Wall, Rammstein: Paris and Black Sabbath: The End of The End, alongside our collaboration with Nick Cave and the Bad Seeds; Distant Sky – Live in Copenhagen, One More Time with Feeling (directed by Andrew Dominik) & 20,000 Days on Earth.

Trafalgar Releasing works with some of the world’s most renowned houses & companies; distributing high-profile arts content to cinemas worldwide from the Royal Shakespeare Company and the Royal Opera House. Additionally distributing in the UK, content from the Bolshoi Ballet, Glyndebourne and The Metropolitan Opera.