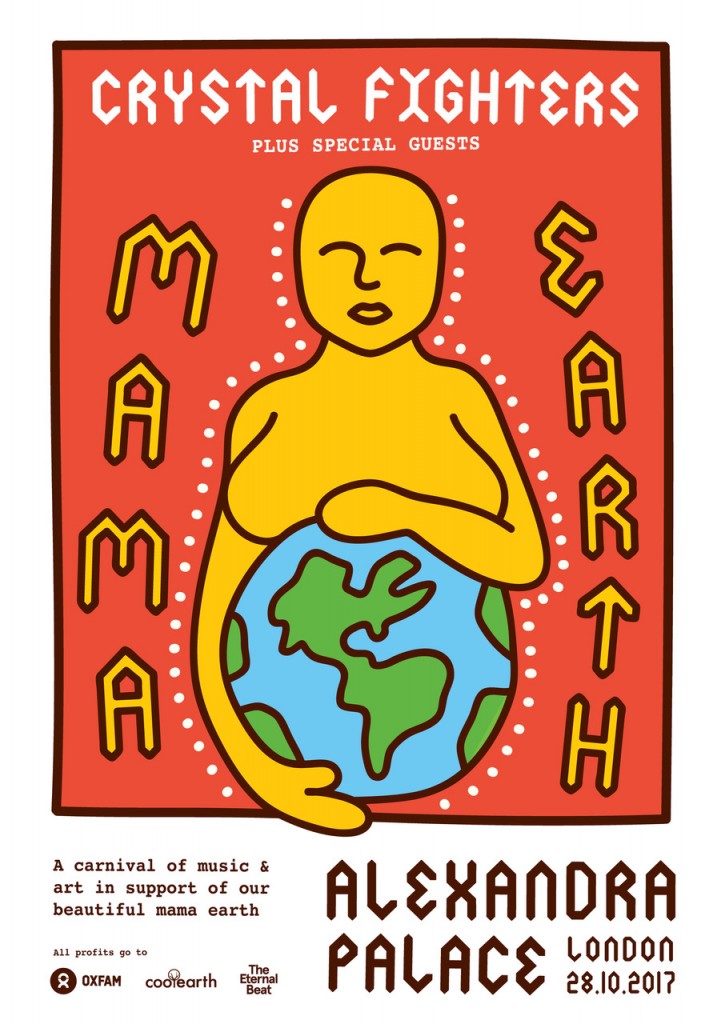 THE BAND WILL DONATE ALL PROFITS FROM THE SHOW TO CHARITY (OXFAM, COOL EARTH, AND THE ETERNAL BEAT)

WATCH THE LIVE VIDEO FOR THE NEW SINGLE, ‘IN YOUR ARMS’ HERE

The band have promised “a carnival of music & art in support of our beautiful mama earth.” Expect the ultimate fiesta of love and community with a full day and night programme and very, very special guests curated by the band to be revealed in due course.

All profits from the show will be donated to three charities, each close to members of the band: Cool Earth (rainforest conservation), Oxfam, and The Eternal Beat (a charity foundation set up in memory of the band’s late drummer Andrea Marongiu). Crystal Fighters will be working closely in partnership and travelling with the chosen charities throughout the year and beyond.

“In our live shows we always focus on love, positivity and togetherness. It’s been an incredible story to come this far and we want this show to have a profound and lasting effect – which is why we we’re working with these charities and donating all the profits to them.” – Crystal Fighters

Crystal Fighters’ brand new single, ‘In Your Arms’, taken from their recent album, ‘Everything Is My Family’, is full of the positivity and spirit which encompasses all aspects of Crystal Fighters’ world. Sebastian of Crystal Fighters says: “This is a love song, that also doubles as a spiritual mantra about the incredible feeling of finally surrendering to a true belief in divine love.”

After a monumental year of selling out shows worldwide including Brixton Academy in London and Barclaycard Arena in Madrid in November, the band have firmly established themselves as one of the best bands performing on the festival circuit.  Having headlined Wilderness Festival last year, this summer, the band will be headlining the last ever Secret Garden Party and Benicassim Festival in Spain, and now Crystal Fighters are set to bring their uplifting, energetic and world uniting show to the prestigious Alexandra Palace on Saturday October 28.

Tickets will go on pre-sale Wednesday 29th March, general-sale Friday 31st March, with all profits going to the 3 chosen charities.