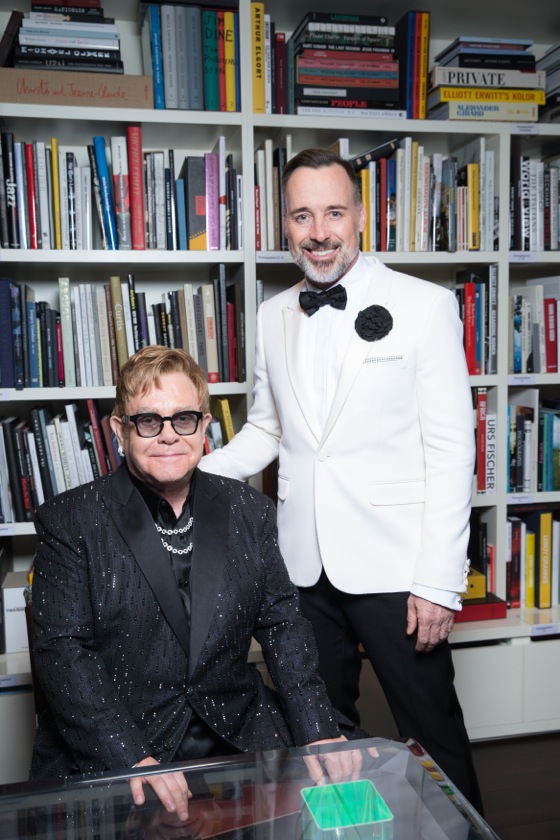 HOSTED BY DAVID WALLIAMS, FELLOW PHILANTHROPISTS INCLUDING ELIZABETH HURLEY, KEVIN SPACEY AND VALENTINO JOINED THE FOUNDATION FOR AN INTIMATE DINNER TO CELEBRATE AND REFLECT ON THE PREVIOUS 12 MONTHS ACHIEVEMENTS, WHILST RAISING IN EXCESS OF £3.3M WITH THIS EVENT

GUESTS WERE TREATED TO A SURPRISE PERFORMANCE FROM ANDREA BOCELLI, A VIDEO ADDRESS FROM US SECRETARY OF STATE JOHN KERRY, PLUS AN AUCTION FEATURING A RARE PIECE OF JEWELLERY FROM BULGARI AS WELL AS A PERSONAL TOUR WITH ELTON JOHN OF THE FORTHCOMING RADICAL EYE EXHIBITION AT THE TATE MODERN

“There is a window of opportunity before us, a window through which we can very clearly see the end of AIDS within my lifetime. We cannot afford to let the window close.”

Elton John, May 2015, addressing the US Senate.

Last night, 23rd June 2016, Elton John and David Furnish opened the doors of their home to fellow philanthropists for the third ‘Woodside Gallery Dinner’. An annual fundraiser to celebrate the previous 12 months work of the Elton John AIDS Foundation whilst raising funds for those affected by HIV, the Woodside Gallery Dinner 2016 raised in excess of £3.3M.

Hosted by David Walliams, the night welcomed guests including Elizabeth Hurley, Valentino and Kevin Spacey. The evening included a series of inspirational talks and addresses from those close to the charity. Speakers included David Furnish, who highlighted the Foundation’s achievements in AIDS prevention education and patient services throughout the past year, a video address from US Secretary of State John Kerry, beneficiaries of the charity and its projects, and many more.

In May 2015 Elton John addressed the US Senate, following his address the US Congress authorised an additional $244million in funding for global AIDS programmes. It also partnered with EJAF on a $10million LGBT fund in ten countries where homosexuality is illegal.

Following the addresses during the evening, guests were treated to an intimate performance from Andrea Bocelli, who performed classic tracks including Time To Say Goodnight and Nessun Dorma. Mentalist Lior Suchard also wowed guests with his unique stage show.

The evening also featured an exclusive auction lead by Simon de Pury, which featured rare and priceless items including artworks by Romero Britto, Luke Jerram and Georg Baselitz, a private tour of the forthcoming Radical Eye Exhibition at the Tate Modern with Sir Elton John and a spectacular Bulgari white gold necklace with round brilliant cut and pave diamonds. Bulgari’s involvement in the evening marks the start of a three year partnership between the Foundation and the jeweler.

‘The Elton John AIDS Foundation’s Woodside Gallery Dinner is the combination of the Foundation’s many high profile spectacle events such as the White Tie and Tiara Ball and an intimate private dinner party. The Woodside Gallery Dinner welcomes many global figures who, as well as having a fantastic evening, help us raise enough funds on the night to support thousands of people around the world affected by HIV. It’s a very special night for us all to be part of and it’s been a delight to welcome so many new faces.’

“This is an event I really love. It’s a chance for us to welcome guests into our home to share an intimate evening where we really get to talk to everyone. To be able to thank people for their extraordinary generosity is a special treat. Not only do we do great work because of this dinner, but the fun of performing and the pleasure of hearing the fabulous performers in such a private setting is incredible. I just wish I could control English weather!”

“This magical event in Sir John’s home was unforgettable. The venue was intimate, the invitees are passionate, and the cause is so important. For Bulgari, bettering the world and doing our part is built into our company culture. It is an honour to be partnered with EJAF, a very effective charity, and we look forward to being part of the solution to fighting AIDS.”