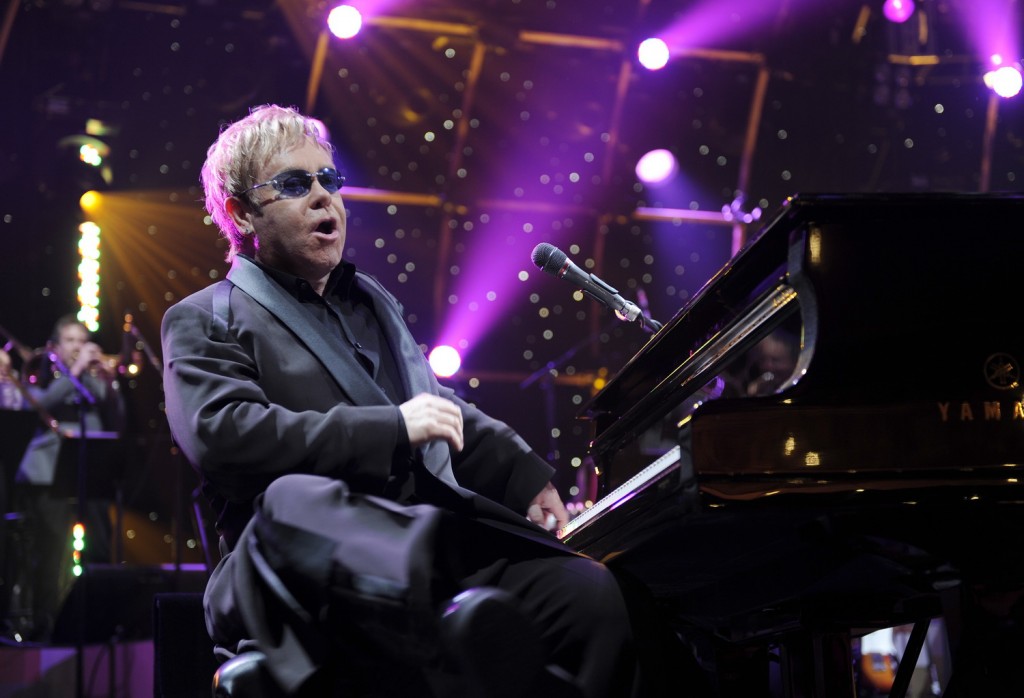 On Saturday 22nd March for one night only, CinemaLive in association with Rocket Music Entertainment Group, Yamaha Entertainment Group of America and Universal Music will release one of the world’s most sensational concerts from the legendary singer, songwriter and performer Elton John. The concert will be shown in over 200 cinemas across the UK & Ireland including Odeon, Cineworld and Vue Theatres, forming a total of 1,200 cinemas worldwide in over 40 countries including the US, Canada, Germany, France, Italy, Spain, Brazil, Mexico and Australia.

Coming to your local cinema the critically acclaimed concert was recorded at The Colosseum at Caesars Palace, Las Vegas.

‘The Million Dollar Piano’, is being performed to standing ovations during Elton’s current residency at Caesar’s Palace and includes all of Elton’s greatest hits from throughout his career including ‘Rocket Man’, ‘Tiny Dancer’, ‘Saturday Night’s Alright for Fighting’, ‘I’m Still Standing’, ‘Goodbye Yellow Brick Road’, ‘Crocodile Rock’ and ‘Your Song’.

At the centrepiece of the performance is the show’s namesake piano, an engineering marvel featuring more than 68 LED video screens created by Yamaha. Nearly four years in the making, the state-of-the-art piano is the perfect accompaniment to Elton’s greatest hits displaying fantastical imagery to complement the entertainer’s fan favourites. Creating a whimsical, one-of-a-kind entertainment experience, the piano weighs in at nearly 3,200 pounds.

Completing the incredible spectacle is the show’s impressive and elaborate baroque style stage set, masterminded by the show’s design team, the late Mark Fisher and Patrick Woodroffe. Fisher (best known for his design of Pink Floyd’s “The Wall” and his work designing the opening and closing ceremonies of the 2008 Beijing Olympics) and Woodroffe conceived and designed the impressive lights display that perfectly augments the set and piano.

Elton said, “I’ve had the best time [in Las Vegas] because I always thought of it as a challenge and wanted put on the best show. I don’t think there could be a better looking show than this in Vegas or in any venue anywhere.”

For a full list of cinemas where the event will take place on Saturday 22nd March, with links to buy tickets please visit: www.cinemalive.com

Two days later, on 24th March, ‘Goodbye Yellow Brick Road’ the ultimate reissue will be released. The seminal 1973 breakthrough album (which is ranked in Rolling Stone Magazine’s Top 100 Great Albums Of All Time) has been remastered and will be reissued on CD, vinyl, limited-edition yellow vinyl, and in a box set featuring a recording of ‘Live At Hammersmith 1973’ on CD, a DVD of Bryan Forbes’ 1973 film ‘Elton John and Bernie Taupin Say Goodbye To Norma Jean and Other Things’, along with a 100-page illustrated hardback book packed with rare photos, memorabilia and a new essay containing interviews with Elton John and Bernie Taupin.

Elton is one of the top-selling solo artists of all time, with 35 gold and 25 platinum albums, 29 consecutive Top 40 hits, and he has sold more than 250 million records worldwide. Elton holds the record for the biggest selling single of all time, “Candle in the Wind ’97,” which sold 37 million copies. He also holds the record for most appearances on Billboard’s Adult Contemporary chart, with his newest single, “Home Again” marking his 69th entry. Since his career began in 1969 he has played over 3,000 concerts worldwide. John has recently been named the first recipient of the BRITs Icon Award, which recognizes the very highest level of British music achievement, presented only to iconic artists whose writing, recording and performances set them apart as having made a lasting impact on the nation’s culture.

CinemaLive is a fully integrated solution that provides the entertainment industry with direct live access to cinema locations and big screens on a national & international basis. CinemaLive distributes both live and recorded content theatrically to over 70 countries worldwide covering a range of event cinema including music concerts, opera, theatre, musicals and comedy. With offices in London and Sydney, the CinemaLive subsidiary has quickly become one of the fastest growing companies in its field since establishing in late 2008.