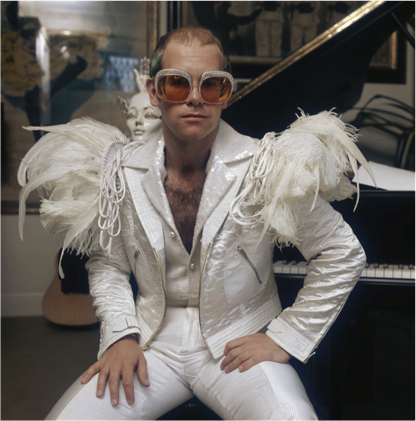 ELTON JOHN’S 70TH BIRTHDAY AND HIS 50-YEAR SONGWRITING PARTNERSHIP WITH BERNIE TAUPIN WILL BE CELEBRATED TOMORROW, MARCH 25, 2017, AT A GALA EVENT IN LOS ANGELES

ROB LOWE WILL SERVE AS HOST

LADY GAGA AND OTHER SURPRISE GUESTS WILL PERFORM AT THE EVENT

THE CELEBRATION WILL BENEFIT THE ELTON JOHN AIDS FOUNDATION AND THE UCLA HAMMER MUSEUM.

Tomorrow, March 25, a gala fundraising event celebrating Elton John’s 70th birthday and his 50-year writing partnership with Bernie Taupin will benefit the Elton John AIDS Foundation (EJAF) and the UCLA Hammer Museum. Held at Red Studios in Los Angeles, the evening will be hosted by Rob Lowe and will feature a gala dinner and special musical performances by Lady Gaga and other surprise guests.

In keeping with Elton’s commitment to philanthropy, he is eager to leverage the celebration of his 70th birthday and his amazing songwriting collaboration with Bernie Taupin in order to support two worthy causes that are the driving passions of his life: ending the global HIV/AIDS epidemic, and art in all its many forms. To that end, this event will raise urgently needed money to help fund the grant-making initiatives of the Elton John AIDS Foundation and exhibitions and programs at the Hammer Museum in LA.

This very special evening will honor the many strands of an unrivalled career and life that still continue to enrich, enthrall, and inspire.  Elton John is a true musical and cultural iconoclast, with a record that speaks for itself. He has achieved worldwide sales of over 250 million records and has 58 Billboard Top 40 singles in the United States. He has written the music for the stage and screen successes Billy Elliot: The Musical, Elton John & Tim Rice’s Aida, and Disney’s cinematic and theatrical sensation The Lion King. A tireless live performer, Elton has played more than 3,500 concerts in over 80 countries. He has collected 12 Ivor Novello Awards, six GRAMMYS®, two Brits, an Oscar®, and a Tony. He has been inducted into the Rock and Roll Hall of Fame and The Songwriters Hall of Fame, and has received a knighthood from Her Majesty Queen Elizabeth II in 1998. He is a tireless charitable campaigner and philanthropist, notoriously outspoken for the causes he believes in. Elton John is an undisputed pop culture legend. His new music has helped many new artists achieve recognition and success. He is constantly moving forward, never resting on his laurels, never becoming complacent, predictable, or dull.

Of his career with Bernie Taupin, Elton simply says, “It’s the same excitement now as when we first started. That this year marks the 50thanniversary of my partnership with Bernie Taupin is mind boggling for me because it seems like only yesterday that I met him. It’s an amazing achievement to stay with one person for 50 years on a creative basis, in an industry where that doesn’t really happen very much.”

On reaching his 70th year, Elton notes, “I’m interested in moving forward all the time, with what I create, my collaborations, and also with discovering the work of other people. I think age is immaterial, provided we keep our minds alive by being open to new things. I can be as excited by a new artist who plays me their demo as I am by a new record of one of my musical heroes. I can be excited by playing a new city I’ve never played before, or revisiting somewhere I know well and seeing how it’s changed. Life is a constant state of flux for us all, and I like to embrace that. I also feel very happy to use my position to bring attention to injustice in the world, and to try to help where I can. At this time in my life I’m the happiest I have ever been.”

Bernie Taupin says of Elton, “It’s been an unconventional partnership and while we pretty much patented the two-rooms technique I’d venture to say you’d be hard pressed to find a couple of songwriters more in sync with each other and their craft”. ELTON JOHN LIVE THIS JUNE ACROSS THE UK. VISIT ELTONJOHN.COM FOR DETAILS

ELTON JOHN AIDS FOUNDATION – At EJAF, we believe AIDS can be beaten. We act on that belief by raising funds for evidence-based programs and policies, and also by speaking out with honesty and compassion about the realities of people’s lives. Sir Elton John created EJAF nearly 25 years ago, first in the United States in 1992 and then in the United Kingdom in 1993. Through the generous support of far-sighted individuals, foundations, and corporations, the two foundations together have raised more than $385 million over the past two decades to challenge discrimination against people affected by the epidemic, prevent infections, provide treatment and services, and motivate governments to end AIDS. The U.S. foundation focuses its efforts on programs in the United States, the Americas, and the Caribbean, while the U.K. foundation funds HIV-related work in Europe, Asia, and Africa. Join us in speaking out, taking action, and contributing to our efforts to achieve a world without AIDS. For more information, please visit www.ejaf.org.

UCLA HAMMER MUSEUM – The Hammer Museum at UCLA offers exhibitions and collections that span classic to contemporary art, as well as programs that spark meaningful encounters with art and ideas. Through a wide-ranging, international exhibition program and the biennial, Made in L.A., the Hammer highlights contemporary art since the 1960s, especially the work of emerging and under recognized artists. The exhibitions, permanent collections, and nearly 300 public programs annually—including film screenings, lectures, symposia, readings, music performances, and workshops for families—are all free to the public. For more information, please visit www.hammer.ucla.edu.