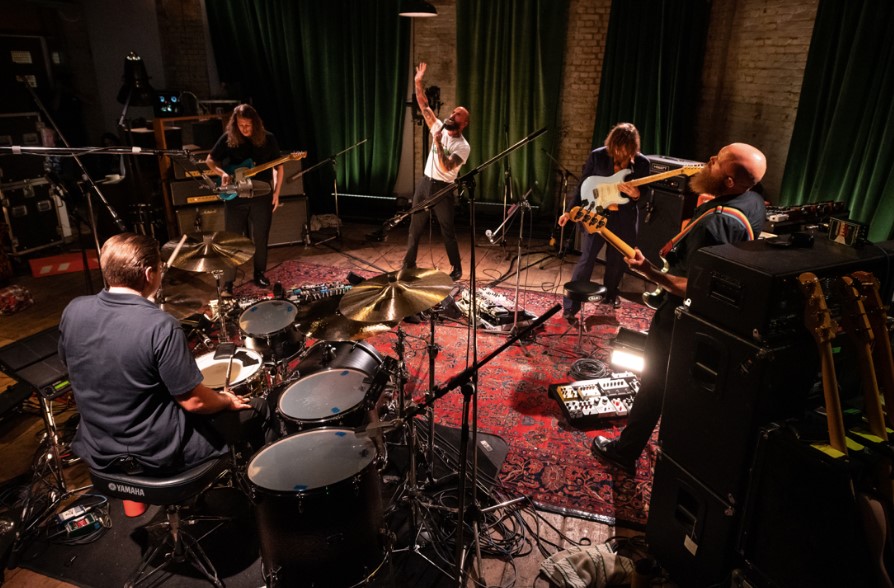 PRODUCED IN COLLABORATION WITH WETRANSFER AND SONOS RADIO, THE SERIES LAUNCHES WITH IDLES ON 1ST JUNE

WATCH A TRAILER FOR THE NEW SERIES HERE Praise for From The Basement:

“From The Basement is exciting because it comes from the desire to cut out the crap that lies between the music and the viewer, to get plugged straight into the mains.”  THOM YORKE

“It was beautifully filmed and the sound quality makes a performance on a regular tv show sound like a wax cylinder recording. No host. Thank God.” JACK WHITE

Today, critically acclaimed live music show From The Basement has re-launched with the announcement of new episodes for 2022 powered by WeTransfer, the company that provides workflow tools for creatives and Sonos Radio, the sound experience brand’s own music service.

Debuting with IDLES on 1st June, the new series will feature exclusive performances from Sons Of Kemet, Warpaint, Caribou, Squid and Nilüfer Yanya, which will premiere on From The Basement’s YouTube channel between June and October this year.

“There’s an atmosphere on From The Basement that I haven’t seen equalled – it’s unlike anything else. There’s a sense of mythology behind it and it’s a dream for us to be involved. We’ve wanted to do this for a very long time”.  IDLES’ Joe Talbot

“What a pleasure it has been doing this again! I’m still just a fan, still super excited to have the opportunity to film all these great artists and have loved making these new shows. After being so busy doing other things I felt that the time was right to rekindle this idea.. to somehow bring it into the present, but the same rules apply now as they did then… no audience or presenter.. just a direct connection with the viewer and a chance for us to take some time to do something special in a controlled environment.. The priority being to make it sound and look great… “ says Nigel Godrich.

Each episode release will be accompanied by an additional song performance per artist released exclusively to WeTransfer Premium and Pro subscribers with supporting editorial on WePresent, their digital arts platform.

Audio versions of the performances will be launching exclusively on a new From The Basement station on Sonos Radio, Sonos’ own music service and music discovery platform, along with episodes from the archive.

“Ever since From The Basement first came onto the scene we have wanted to be involved in what I think is possibly the greatest digital music experience ever made. We have chased the team from LA to London to bring it back. We could not be happier to be involved in the resurgence of From The Basement, a massive thank you to Gilles Peterson for helping to make it happen.” says Damian Bradfield, Co-Founder of WeTransfer.

“Building on our long running partnership with Nigel we are excited to support this new season of From the Basement. We created Sonos Radio with the goal to provide artists’ unique platforms and celebrate thoughtful curation, and the station we’ve built with all the previously released tracks from seasons’ past and the upcoming releases couldn’t better represent what we strive for.” says Joe Dawson, Head of Sonos Radio.

WeTransfer streamlines the workflow process for millions of creative professionals. Its suite of creative productivity tools make it easy to collaborate, share and deliver work. WeTransfer has more than 87 million monthly active users in 190 countries. As a certified B Corporation™, WeTransfer has long been a champion of using business as a force for good. Since its founding in 2009, WeTransfer has donated up to 30% of its advertising real estate to raise awareness for artists, creative work, and the world’s most pressing issues.

Sonos Radio is the premier radio experience on Sonos. Built for and inspired by Sonos customers, Sonos Radio represents the broadest selection of radio available around the world, bringing together more than 60,000 broadcast radio stations and original stations, radio shows and podcasts curated by artists and creators such as Thom Yorke, Lorde and Erykah Badu. Available free to all customers globally, Sonos Radio is an ad-supported streaming radio service that comes pre-loaded in the Sonos App, bringing all streaming radio into one place.

Music from past From the Basement performances will also be available today (25th May 2022) on Sonos Radio on the newly launched From the Basement radio station, where also the audio of all six new episodes can be found as they launch, as well as on radio.sonos.com. For more context on the re-launch of From The Basement, listeners can check out a brand new Radio Hour with Nigel Godrich.