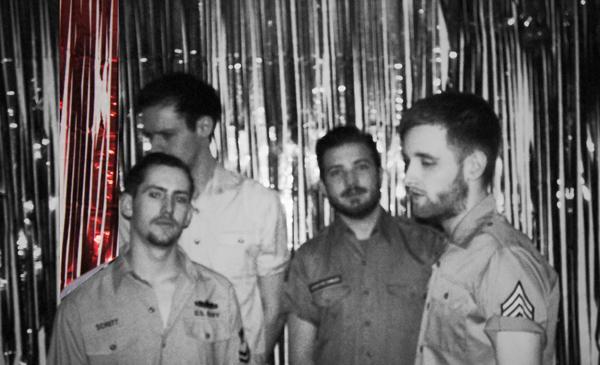 Glasgow four-piece Holy Esque will release their single ‘St.’ on the 25th March. On the single Pat Hynes said “’St.’ revolves around appreciation and belief, in life and in one’s self. It portrays a character who loses everything around him through an actual fear of loss, which in turn, results in bitter tragedy”

The band have once again teamed up with Kevin Burleigh (Glasvegas, Simple Minds) to record and produce the record. Kevin also produced the band’s debut EP in 2012 in the DIY Pink Megic Studios. Armed with big riffs, thick crunchy bass lines and perhaps one of the most unique, yearning vocals in years, Holy Esque meld post-punk with and 90’s alternative rock influences with skilful ability on their debut EP.

Following the release of their critically heralded self-titled debut EP the band released a follow up single ‘Tear’ on August 7th 2012. In the back end of 2012 after being hand picked by Sune Rose Wagner the band went on their biggest tour across Europe with The Raveonettes where they continued to impress crowds with their intense live shows.

When they aren’t making music, Glasgow School of Art Students are busy maintaining the aesthetic of the band; Designing their own artwork, printing posters or curating a Tumblr blog of photos. The name and symbol representing Holy Esque doesn’t necessarily represent a religious ideal, rather a concept open for interpretation – something for the band to believe in and fans to put faith in.

You can listen to the debut EP here – http://snd.sc/Ydcznw