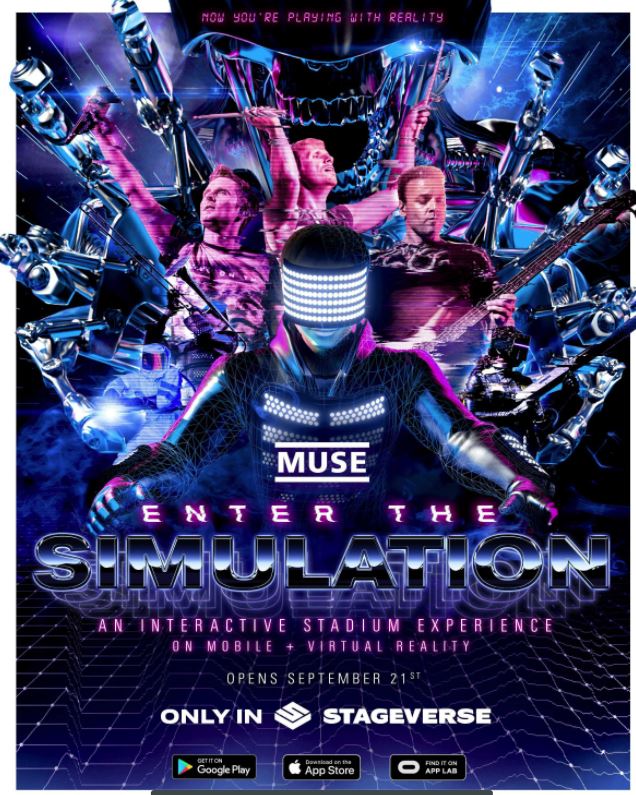 RE-LIVE IT FROM SEPTEMBER 21

FANS CAN VIRTUALLY ATTEND WITH FRIENDS AND OTHER FANS FROM AROUND THE WORLD IN 3D AVATAR FORM, TALK, INTERACT AND COLLECT EXCLUSIVE DESIGNS FROM BALMAIN PARIS, THE HISTORIC PARISIAN FASHION HOUSE, AND MUSE

Download hi-res images of the Stageverse experience and “Muse: Enter The Simulation” HERE

The launch includes a highly anticipated partnership with GRAMMY Award-winning rock band Muse for “Muse: Enter The Simulation.” The show was recorded in July 2019 at Wanda Stadium, Madrid and is the first cross-platform, interactive concert experience created by Stageverse for its virtual stadium that opens on September 20 —  check out the trailer here.

Available on both mobile (via the Stageverse app on iOS and Android) and in VR (via the Stageverse app available exclusively in the Oculus Quest App Lab), “Enter The Simulation” will bring fans closer than ever to a stadium-sized Muse concert that they’ll be able to virtually attend in avatar form. The 2-hour, uncut show seamlessly blends immersive, 360-degree views captured and originally performed at Madrid’s Metropolitano Stadium, augmented with 3D visual effects inside the virtual stadium. Fans can watch the show from 16 viewpoints (including closeup on the stage with frontman Matt Bellamy, and a panoramic view from the back of the venue), talk to each other, and express themselves with interactive toys and exclusive virtual outfits from Muse and luxury fashion house Balmain Paris, designed by Creative Director Olivier Rousteing — including the recreation of frontman Matt Bellamy’s jacket, worn onstage during the show.

Free for a limited time as part of Stageverse’s September 20 launch, “Muse: Enter The Simulation” is the most immersive, high quality content capture to date of the original Simulation Theory show, which Muse toured to over 29 countries and more than 1 million fans. The show will run weekly, with an always-on preview available for fans to experience at any time.

“Simulation Theory has always been about creating experiences that redefine the human role in programming and technology,” says Muse frontman and co-founder Matt Bellamy. “We can’t wait for our fans to be able to truly immerse themselves in our Simulation Theory world and take full advantage of everything that the Stageverse experience will offer.”

Balmain’s partnership with Stageverse and “Muse: Enter The Simulation” builds upon the historic Parisian fashion house’s long and singular history of melding together music and fashion. For over 75 years, the house has been dressing the leading performers of every era—beginning during Balmain’s earliest days, when Pierre Balmain dressed Europe’s greatest mid-century musical stars, including Josephine Baker, Juliette Greco and Dalida, and continuing up to the present, as Balmain’s current creative director, Olivier Rousteing, partners with our era’s biggest talents, including Beyoncé (most notably for her iconic 2018 Coachella performance), Jennifer Lopez, Maluma and Björk. Making even more clear Balmain’s distinctive preference for pairing music and fashion, once a year the house presents some of its latest collections during The Balmain Festival, which melds together concert and runway experiences by inviting Rousteing’s favorite artists to perform as his latest designs are presented to a crowd of thousands. During the recent pandemic, as health regulations made traditional runways impossible, Balmain has shown itself to be a pioneer in innovative fashion-week presentations, with Rousteing premiering a variety of new formats, including the house’s first-ever virtual showing of its Men’s and Women’s collections in March 2021.

“As I’ve often repeated over the past decade, my Balmain team and I are determined to always break down boundaries, as we search for new and compelling manners to communicate with an ever-expanding audience,” explains Balmain Creative Director, Olivier Rousteing. “Working with Muse and Stageverse is helping us to do just that—while also continuing this house’s long association with great performances and talented musicians.”

Stageverse’s launch will also feature the opening of Center Stage, a multi-leveled gallery, hub and meeting space that will feature music and art, including an interactive exhibition with acclaimed international visual artist Shantell Martin opening in October.

“We’re focused on creating a place where your digital identity and culture can live and thrive, and that starts with a high fidelity, premium, and accessible experience,” says Stageverse Co-Founder and CEO Tim Ricker. “As a result, we are attracting forward-thinking partners such as Muse, Balmain, and Shantell Martin, who are looking to provide an elevated metaverse experience to their communities. By rolling out our NFT economy and marketplace next, we will unlock community capitalism to the fullest extent. When a customer becomes a participant through ownership of their digital identity and goods, they are motivated to invest and create value for themselves and in turn the entire community.”

“We have seen the metaverse get a lot of attention recently and Stageverse will undoubtedly be a huge player in the space. They have a best-in-class team and product which will lead to fundamentally changing the way people live their digital lives and invest in their digital identities,” adds Stageverse investor Alan Breed, President of Edgewood Capital.

Stageverse is a social metaverse platform connecting communities, brands and creators through beautifully-designed 3D virtual venues, ownable digital content and interactive experiences. Designed to power the most accessible and premium destinations in the metaverse, people use Stageverse to meet, talk, express themselves, discover, attend events, and collect virtual goods.  Stageverse will roll out a blockchain-powered economy and NFT marketplace in the coming months. Stageverse is in public beta for iOS, Android and Oculus Quest via the App Lab. Visit Stageverse.com for more details.

Stageverse is created by Stage, Inc. a metaverse technology company headquartered in Los Angeles, the team consists of engineers and designers from Shazam, Magic Leap, HTC, Intel, Samsung Next, Blizzard and Atari.

Muse is Matt Bellamy, Dominic Howard and Chris Wolstenholme. Their last album, Simulation Theory, debuted at #1 and marked the band’s sixth straight album to debut in the U.K top spot. Their previous studio album, Drones, went on to win a Grammy Award for Best Rock Album, the band’s second, in February 2016. Since forming in 1994, Muse have released eight studio albums, selling over 20 million copies worldwide. Widely recognized as one of the best live bands in the world, Muse have won numerous music awards including two Grammy Awards, an American Music Award, five MTV Europe Music Awards, two Brit Awards, eleven NME Awards and seven Q Awards, among others. The band is currently in the studio working on their next record.

More than 75 years ago, when Pierre Balmain first introduced his “New French Style,” it immediately became clear to all that his eponymous house was offering a distinctly fresh, bold and feminine conception of haute couture, one which broke with many of the well-established conventions of the era. His audaciousness paid off. Pierre Balmain became one of the handful of young French talents who ushered in the mid-century’s golden age of couture and helped to re-establish Paris as the world’s fashion capital.

For more than ten years, Balmain’s Creative Director, Olivier Rousteing, has been inventively building upon Pierre Balmain’s extraordinary legacy, while always remaining true to his own determination to design clothes that reflect the way his inclusive, powerful and global Balmain Army wishes to live today. The result is a unique and instantly recognizable Balmain silhouette, style and attitude that highlights the singular craftsmanship of the house’s celebrated ateliers, while consistently referencing a rich Parisian heritage.