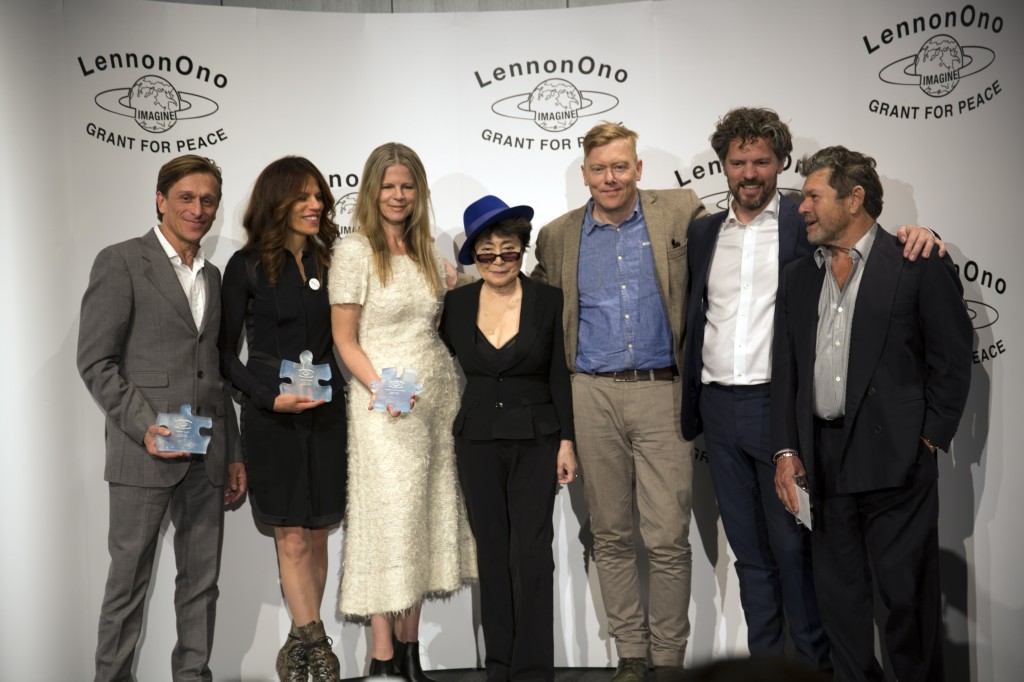 JOHN LENNON IS COMMEMORATED IN THE LENNON ONO GRANT FOR PEACE, PRESENTED TODAY BY Yoko Ono IN REYJKAVIK, ICELAND

THE AWARDS WERE GIVEN TO JANN WENNER, JEREMY GILLEY, ART PRODUCTION FUND AND JON GNARR

Yoko Ono today presented the latest four recipients of the biennial Lennon Ono Grant For Peace on what would have been John Lennon’s 74th birthday.

The awards were presented in Reyjkavik, Iceland in a ceremony which happened before Ono  attended the annual event to illuminate Imagine Peace Tower on the island of Videy. The tower is lit on the day of John Lennon’s birth, and extinguished on December 8, the day of his death.

The recipients of the Lennon Ono Grant For Peace 2014 are:

JEREMY GILLEY – FOUNDER OF THE NON-PROFIT ORGANISATION PEACE ONE DAY

JON GNARR – POLITICIAN, FORMER MAYOR OF REYJKAVIK. Jon Gnarr will be donating his award money to The Women’s Shelter in Iceland.

Full biographies of each of the recipients can be found overleaf.

“Every year on October 9, many people in the world think about my husband John on his birthday. For me, it’s also very important to celebrate the birth of our son Sean, who was also born on this day. But at the same time the world is an increasingly difficult and hostile place to be and I think it’s very important to celebrate  people and organisations who help us all to promote the idea of peace.  Although each  recipient works in very differing fields, for me it’s a continuation of the work that John and I did together and it’s what what John would have wanted. John’s music lasts forever and I myself continue to work for peace; I thank every one of the recipients and everyone in the world who has stood up for peace, helping us all to keep the flame alive”.

The Lennon Ono Grant For Peace was established by Yoko Ono in 2002. The full list of recipients since 2002 is:

Jann S. Wenner is the founder of Rolling Stone and the Chairman of Wenner Media, which also publishes Us Weekly and Men’s Journal.

From its inception in 1967, Rolling Stone became the voice of a generation, and is one of the most successful and iconic magazines in publishing history, with numerous accolades including 15 National Magazine Awards.

Wenner’s commitment to quality journalism has kept Rolling Stone in the forefront of the popular dialogue, both recording and shaping the zeitgeist through definitive music coverage, provocative interviews, award-winning photography and incisive investigative and political reporting.

Wenner is chairman of the Rock and Roll Hall of Fame Foundation, Inc., a 30-year-old nonprofit organization which honors artists and music industry professionals who have made significant contributions to rock & roll.

Wenner is the father of six children. He resides in New York City.

After a successful career acting in film and television, Jeremy began making films in 1995 and in 1999 founded the non-profit organisation, Peace One Day to document his efforts to establish the first ever annual day of global ceasefire and non-violence with a fixed date.

Peace One Day’s objective is to institutionalise Peace Day around the world, making it self-sustaining.

Jeremy has a target of reaching 3 billion people with the message of Peace Day by 21 September 2016; a target made all the more realistic following a donation of $10 million by the Howard G. Buffett Foundation.

Art Production Fund is a 501(c)(3) non-profit organization dedicated to commissioning and producing ambitious public art projects, reaching new audiences and expanding awareness through contemporary art.  APF offers guidance to artists and brings together the individuals, institutions, and resources needed to realize and promote projects. APF selects its project with the aim of reaching wide audiences and reducing the physical barriers that may hinder participation in contemporary art.

APF produced Elmgreen & Dragset’s “Prada Marfa” in 2005.  “Prada Marfa”, a site-specific, permanent land art project, is APF’s only permanent public project. The work is located on the outskirts of Valentine, Texas and resembles a Prada boutique.  Not meant to function as a place of commerce, “Prada Marfa” is firmly positioned within a contemporary understanding of site-specific art, but also draws strongly on pop art and land art.  In 2012, APF presented Yoko Ono’s iconic “Imagine Peace” video in 24 languages on high-resolution LED screens throughout Times Square.  That same year, APF produced Yvette Mattern’s “Global Rainbow After The Storm,” where seven beams of high power laser light was projected over 25 miles across NYC as a beacon of hope post-Hurricane Sandy. Most recently, APF produced FriendsWithYou ‘s monumental “Light Cave” sculpture in the meatpacking district of New York.  The 25-foot tall inflatable sculpture pulsated with energy and light, and viewers were allowed to walk under and interact with the massive structure.

Doreen Remen graduated in 1989 from The Rhode Island School of Design with a Bachelor of Fine Arts and a Bachelor of Architecture. She went on to earn her Masters degree in Architecture from Columbia University in 1991. She worked with a selection of architecture firms in NYC before Co-Founding Art Production Fund in 2000. In 2013, along with Yvonne Force Villareal, Remen created Culture Corps, an advisory firm that provides curatorial programming and art consultation to select clientele. In 2014, Remen launched an aggregate shopping site for artist-designed merchandise from around the world called Artmarkit.com.

Yvonne Force Villareal began her public career in the arts in 1995 as the President and Curator of Yvonne Force Inc. (YFI), a company backed in part by the late Mr. Laurance S. Rockefeller and established to support young contemporary artists by acquiring/lending their work.  In 2000, Force Co-Founded Art Production Fund. Force graduated from The Rhode Island School of Design in 1988 with a degree in Fine Arts and has served on the Board of that department since.  She has served as a Board member for White Columns, the alternative gallery in Chelsea, since 1995.  Along with Doreen Remen, Force launched Culture Corps in 2013, an advisory firm that provides curatorial programming and art consultation to select clientele.

Jón Gnarr (b. 1967) was diagnosed as a child with severe mental retardation due to dyslexia, learning difficulties, and ADHD. He nevertheless overcame his hardships and went on to become one of Iceland’s most well-known actors and comedians, and published the first two volumes in his fictionalized autobiography in 2006, The Indian, and 2009, The Pirate (the third volume will be published in Iceland in fall 2014. In late 2009 Gnarr formed the Best Party with a number of friends with no background in politics. The Best Party, which is a satirical political party that parodies Icelandic politics and aims to make the life of the citizens more fun, managed a plurality win in the 2010 municipal elections in Reykjavik, and Gnarr became Major of Reykjavik. His term as mayor is up in June 2014 and he plans to use his post-mayor years to continue writing and speaking on issues that are most important to him: freedom of speech, human rights, protecting the environment, and achieving international peace.