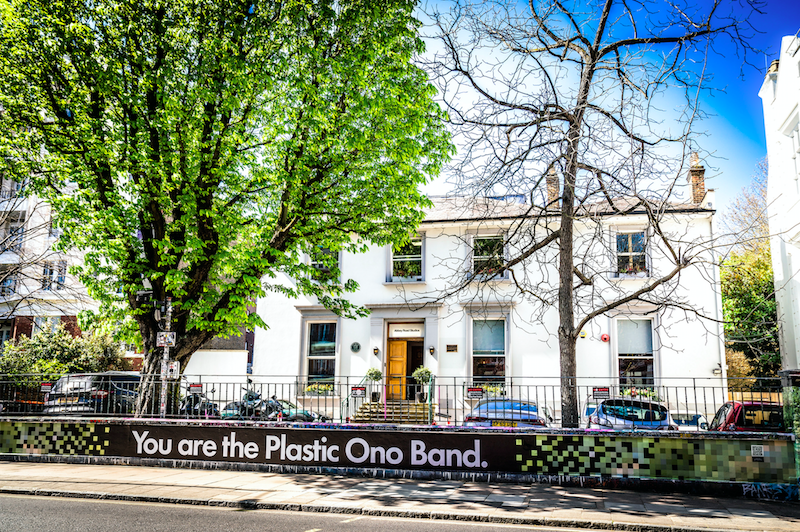 ‘Through this still-astonishing album, Lennon’s solo star shines on.’ – ***** The Sun

‘It’s as brave and fascinating as it’s ever been.’ – **** RECORD COLLECTOR

‘As much of a sensory box as a pop record, it remains as arresting and difficult as it was 51 years ago. And, as the man said, that’s reality.’ – 10/10 Uncut

YOU ARE THE PLASTIC ONO BAND

To coincide with the release, the wall in front of the famed Abbey Road Studios has been taken over and adorned with the iconic album cover artwork of John Lennon/Plastic Ono Band, which along with Yoko’s companion album, was recorded there in 1970 when it was known as EMI Studios; portions of the Ultimate Collection were mixed there in 2020. Download photos here.

Emblazoned with John & Yoko’s declaration that “You Are The Plastic Ono Band,” the mural features a QR code directing to a newly launched website PlasticOnoBand.com where fans can claim a piece of the album art via an unique, interactive mosaic and thereby join the Plastic Ono Band. The album cover art has been broken into thousands of individual tiles which are assigned randomly when visiting the site. Fans can then claim a tile by writing their name and an optional message. When they zoom out they will see the other messages and be able to watch the picture build.

SPOTIFY CANVAS: I AM THE EGBERT

Sean Ono Lennon has created a captivating and innovative animation series using the Spotify Canvas medium. Written and directed by Sean, the series of short looping scenes tell the story of a character called Egbert, whose life experiences strangely mirror the sentiments in the sequence of songs on the eleven album tracks, and enjoys encores with the singles “Give Peace A Chance,” “Cold Turkey” and “Instant Karma! (We All Shine On).”

Working closely with the team behind the Emmy Award-winning, Oscar-nominated 2007 animated short, “I Met The Walrus,” about his father John Lennon, the Egbert films were written and directed by Sean Ono Lennon, with producer Jerry Levitan, illustrator James Braithwaite and Director of Animation Josh Raskin, coordinated by Simon Hilton for Lenono. Experience them on mobile here: https://johnlennon.lnk.to/PlasticOnoBand2021PR/spotify

Fans around the world are invited to simultaneously listen together to the new Ultimate Mixes of John Lennon/Plastic Ono Band, tomorrow, Saturday, April 24 at 10 am PDT/1 pm EDT/6 pm BST as part of #TimsTwitterListeningParty, the acclaimed interactive listening experience created and hosted by Tim Burgess (The Charlatans UK).

Visit TimsTwitterListeningParty.com or johnlennon.com for details about how to join.

Available today via Capitol/UMC, the eight-disc super deluxe box set, John Lennon/Plastic Ono Band – The Ultimate Collection, is an immersive, deep listening experience and in-depth exploration of what John once described as “the best thing I’ve ever done.” Fully authorized by Yoko Ono Lennon, who oversaw the production and creative direction, and from the same audio team that worked on 2018’s critically acclaimed Imagine – The Ultimate Collection, including triple GRAMMY®-Award winning engineer Paul Hicks and mixers/engineers Rob Stevens and Sam Gannon, the Ultimate Collection puts listeners in the center of the studio and explores the album’s 1970 recording sessions at EMI Studios 2 & 3, Abbey Road along with John’s post-Beatles singles, “Give Peace A Chance,” “Cold Turkey” and “Instant Karma! (We All Shine On)” from inception to the final master through scores of unreleased and rare demos, rehearsals, outtakes, jams and studio conversations, revealing how these beloved songs came to be. Everything in this expansive box set has been newly mixed from scratch from brand new 192kHz/24bit hi-res transfers. In addition to the various new mixes, the set boasts 87 never-before-heard recordings.