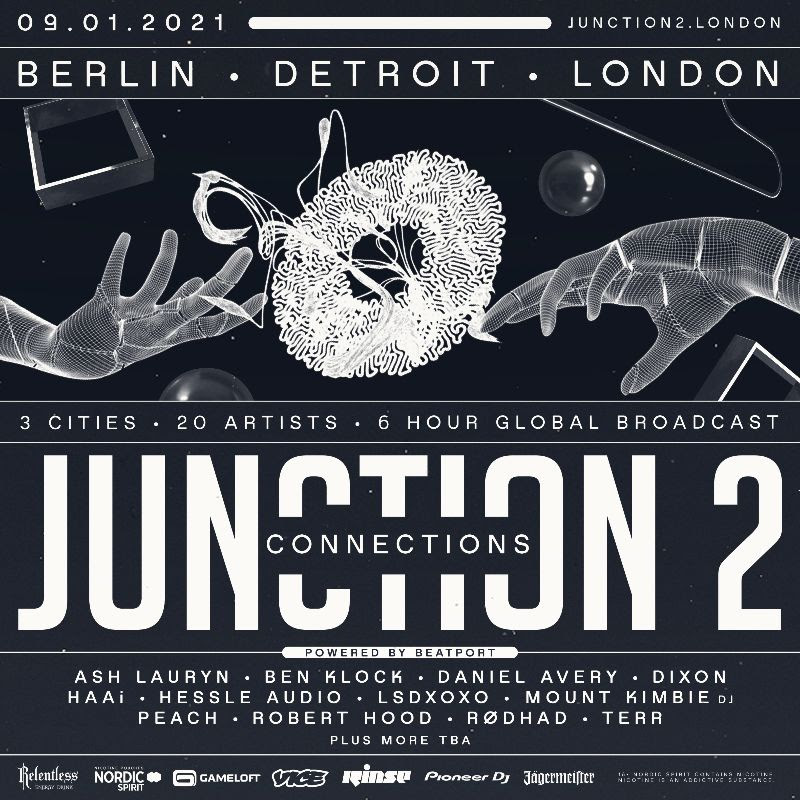 THE SPECIAL SIX-HOUR BROADCAST WILL BE STREAMED FROM THREE ICONIC MUSIC CITIES – LONDON, BERLIN AND DETROIT

Junction 2 Festival has announced a special global livestream event to kick off the new year in style – Junction 2: Connections – which will take place Saturday 9 January 2021. The livestream will bring music from three pioneering cities of electronic music direct to fans who can enjoy it in the safety of their own homes.

At a time when music fans can’t freely experience dance-floors in different countries around the world, Junction 2: Connections, powered by Beatport, will pay homage to the global sounds that have influenced Junction 2 Festival with three different line-ups broadcast from London, Berlin and Detroit.

The six-hour online and radio broadcast, which will take place from 6pm-Midnight GMT, brings together sets from some of the scene’s best loved artists, and going beyond the usual DJ stream the event will present an interactive experience for the festival’s dedicated fan-base.

The artists will play across three distinct “stages” – The Console in association with Relentless Energy Drink (broadcast from London), The Hex in association with Nordic Spirit (Detroit), and The Vault (Berlin), as well as the addition of a hidden afterparty stage commencing after the main event has ended.

Listeners can choose to enjoy the music via the webcast, radio via Rinse FM or Beatport’s Twitch channel. The Junction 2 Festival website will serve as the central hub for the virtual world J2v, although fans will also have the option of watching the streams through social media channels including Facebook, YouTube, Twitch, Mixcloud Live and Woov. The J2v virtual world will have some new additions from its debut this summer, including multiplayer functionality so fans can join other friends enjoying the stream and “dance together” with personal avatars – a whole new interface which allows you to stream while you explore.

The ‘Junction 2: Connections’ line-up in full A-Z is: