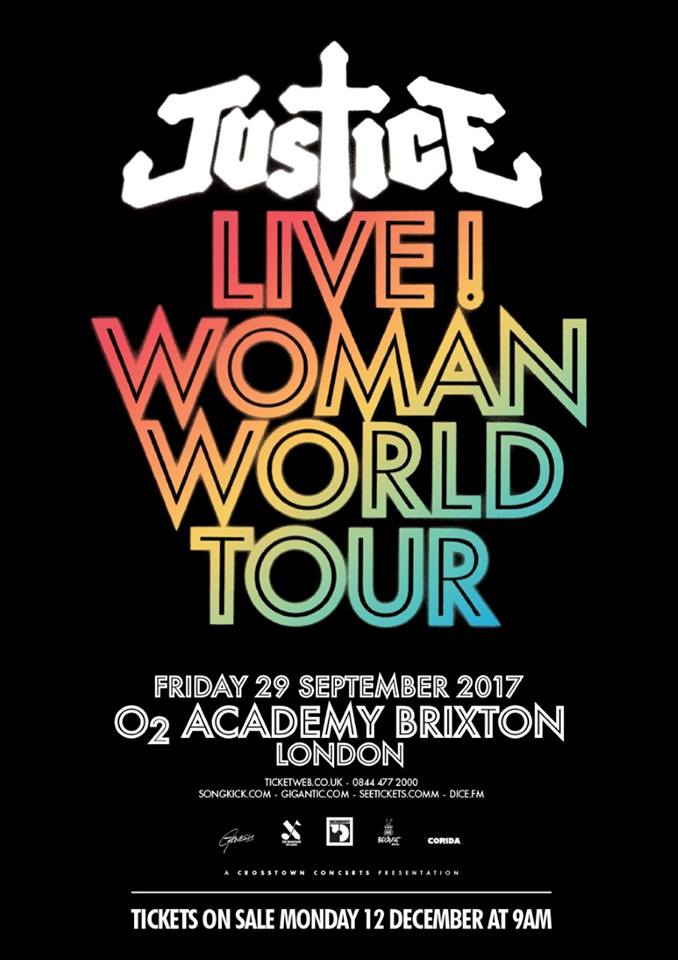 FURTHER UK DATES TO BE ANNOUNCED

Grammy Award-winning duo Justice will perform live at London’s Brixton Academy on September 29th 2017 as part of their ‘Woman’ world tour. Further UK dates will be announced in due course. Tickets for the show are available for pre-order now via the band’s website www.justice.church

Praised for their live shows, Justice will bring a new live set up to London for the September date – further details to follow. This will be the first time Justice have brought their live show to the UK since 2012. Since the release of their debut album in 2007, the band have performed headline shows at festivals and arenas across the globe, as documented by their two live albums: 2008’s A Cross The Universe and 2013’s Access All Arenas.

Justice’s new album ‘Woman’ is out now and features the tracks ‘Safe And Sound’, ‘Randy’, and latest single ‘Fire’ – the video for which stars Susan Sarandon. Critical acclaim for the album:

“An assured, accomplished and confident body of work” – Mixmag

“A masterpiece” – The Quietus

Labelled by The Observer as “era-defining” in their 5-star review of the album, Justice’s debut LP † was met with widespread acclaim and hit #1 on the U.S. Dance/Electronic Albums chart. Their 2011 follow up album Audio, Video, Disco saw Justice expand upon their distinctive sound by further incorporating their numerous contrasting musical influences.