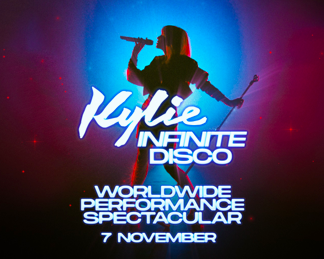 JOIN KYLIE ON A JOURNEY TO HER INFINITE DISCO, A PERFORMANCE SPECTACULAR STREAMED ACROSS THE GLOBE ON 7 NOVEMBER

On 7 November Kylie will stream a ticketed performance across the globe, taking fans on a journey inside her imagination to another dimension.

‘Kylie: Infinite Disco’ will take viewers through a parallel universe from solitary isolation to an alternative euphoric dance-floor community of togetherness. The visual world imagined by Kylie and the creative team at Studio Moross and Sinclair / Wilkinson ends in a future time and place where we can, in Kylie’s words, “all be as one again”.

The performance will feature many of the tracks on Kylie’s highly-anticipated new album, ‘Disco’, due out 6 November via BMG. As well as the new tracks, the unique broadcast will include some very special Kylie classics. The tracks have been specially re-arranged for this one-off event by long-time Kylie collaborators Biff Stannard and Steve Anderson.

‘Kylie: Infinite Disco’ is co-directed by Kate Moross and Rob Sinclair. The choreography is created by another long-time Kylie collaborator, Ashley Wallen, known for his work on The Greatest Showman.

Tickets for the 50 minute spectacular will go on general sale on Wednesday 21 October at 9am BST – buy tickets here: https://kylie.lnk.to/tickets

A special artist pre-sale will go live at 9am on Tuesday 20 October with the chance to win a virtual meet and greet with Kylie, plus special album and ticket bundles available.

“Kylie: Infinite Disco’ will not be available to view on demand after it has been streamed, and the only way to watch it will be to purchase a ticket.

The stream will commence at the following local times on 7 November, with fans able to choose whichever stream they prefer.

‘Kylie: Infinite Disco’ is a JV production by BMG Rights Management (UK) and Driift in partnership with Darenote and A&P Artist Management.

‘BMG are thrilled to be partnering with Driift, Darenote and A&P Artist Management on what is set to be a spectacular event. Kylie is the queen of reinvention and progression and we can’t wait to see how she brings this show to life in a virtual world. We are very excited and honoured to be a part of the creative process working with the very talented Kate Moross, Rob Sinclair and of course Kylie herself to bring Infinite Disco to the world.”

“It was a natural choice for BMG to partner with Driift on the Kylie broadcast. Driift have successfully led the way on promoting ticketed livestreams and we are delighted to be co-producing what promises to be an extraordinary Kylie performance”.

“It’s been a real joy to work with Kylie’s management, their creatives and the forward-thinking team at BMG. As a promoter and producer, Driift was established as a uniquely collaborative business, where we can work alongside artists and their partners to deliver compelling shows that lift online audiences from their seats. Infinite Disco will be euphoric in every sense, and is guaranteed to thrill Kylie’s global fanbase.”

Driift is a promoter and producer of unforgettable, ticketed livestream events, working with headline artists such as Laura Marling, Nick Cave, Dermot Kennedy, Biffy Clyro, James Bay, Niall Horan, Kylie Minogue and many others.  Re-establishing value in the audio-visual artform, we are dedicated to curating the greatest artists on the planet in their element.