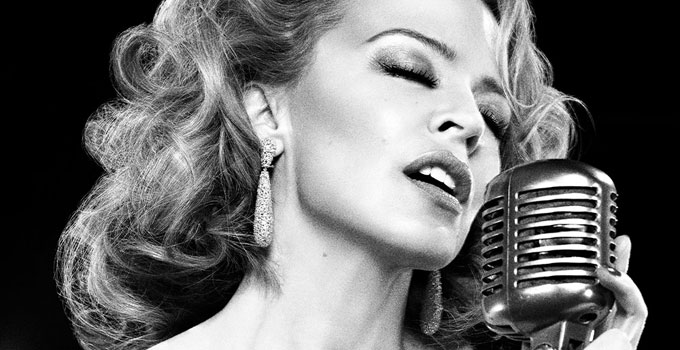 THE ALBUM FEATURES CLASSIC KYLIE TRACKS, ALL WITH BRAND NEW ARRANGEMENTS WITH MANY FEATURING A FULL ORCHESTRA. THE ALBUM ALSO INCLUDES THE PREVIOUSLY UNRELEASED TRACK “FLOWER”.

KYLIE WILL PERFORM MANY TRACKS FROM THE ALBUM THIS WEEKEND IN HYDE PARK AT PROMS IN THE PARK WITH THE FULL BBC SYMPHONY ORCHESTRA.

Nick Cave re-recorded his vocal on the famous duet, “Where The Wild Roses Grow”, especially for the album.

Other highlights of the album include a wonderfully poignant “Better The Devil You Know”, the ever-amazing “Confide In Me”, a sultry “On A Night Like This”, a joyous “All The Lovers”, the beautiful “Finer Feelings” and a version of “The Locomotion” which swaggers with true 1950’s panache.

Over all 16 tracks one thing becomes very clear – stripped of her high end pop production, the emotional resonance of many of Kylie’s songs has never been clearer, nor has her voice ever sounded better.

Kylie will perform most tracks from the album with the BBC Symphony Orchestra this Saturday September 8th at London’s Hyde Park, headlining Proms In the Park.

The track-listing for the album is:

“The Abbey Road Sessions” will be available in the following formats: