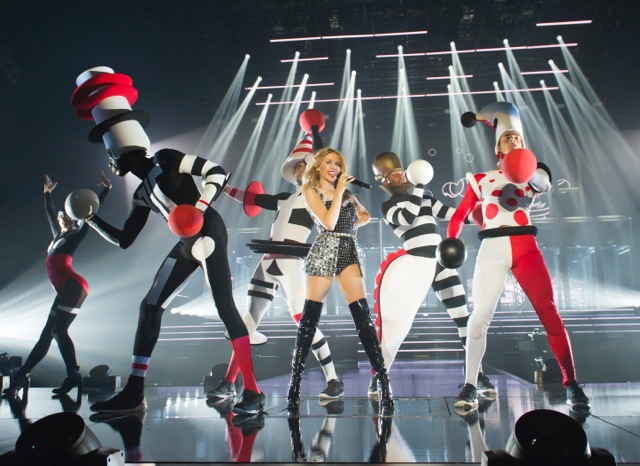 Kylie EMBARKS ON KISS ME ONCE TOUR

Tonight (September 24th 2014) Kylie triumphantly opened her Kiss Me Once European tour, taking to the stage at Liverpool’s Echo Arena.

Before the show started the premiere of an 8 minute film, “Sleepwalker” featuring Kylie in an abstract dreamscape was played.  In the piece Kylie plays several different characters including incarnations of Miss Havisham and Sleeping Beauty –Sleepwalker features three brand new tracks by Kylie + Garibay and was directed by William Baker.  With four Grammy nominations, five number ones and several top ten Billboard Dance records; as well as numerous hit records with artists including Lady Gaga, U2, and Britney Spears – he was an obvious choice for the collaboration.  Kylie and Garibay met during the recording of the Kiss Me Once album and their work together developed into the Sleepwalker project.

The three tracks on Sleepwalker are: Glow, Wait and Break This Heartbreak.  Once the tracks were recorded both Kylie and Garibay felt the tracks had a strong cinematic potential, leading to the creation of Sleepwalker.  The fourth new track is Chasing Ghosts which features in the live show itself.   Kylie wanted to record these tracks as something for the fans to be able to enjoy immediately, all four tracks are up online and available to download now, here: https://soundcloud.com/kylieminogue/sets/kylie-garibay

True to form, the live is show is nothing short of spectacular, complete with a sugar coated hot pink life size dolls house, an incredible light show, giant glowing red lips, showgirls decorated in red lobsters and much, much more.  The impressive set design by Alan Macdonald is inspired by Bauhaus architecture and the neons and windows of peep shows and strip clubs.  The show is divided into six acts: Surrealist Girlie Revue, Bauhaus Disco, Dolls House, Fashsex, Kiss Me Once, Showgirl2014 and Into The Blue.  The Kiss Me Once Tour is directed by long time collaborator and creative director William Baker, while musical direction comes from Steve Anderson and the choreography is by Ashley Wallen.

An array of glittering costumes were debuted this evening including a couture gown by Marchesa, an incredible silver and blue mirrored dress by Julien Macdonald and a Dolce and Gabbana corset accompanied by a sparkling Swarovski crystal headpiece.

Kylie said of the tour:

‘For me, it’s the ultimate because you are really living in the moment.  All aspects of what I do have to come together in a live environment, which is at once thrilling and nerve-wracking!  Having so much shared energy in one place is amazing.  All cast and crew come with as much energy as the audience so it’s a case of chicken or the egg….we don’t know who was first but we are all there for the same thing –  united in that space and time.  Also, I am aware that almost everyone in the audience has played a part in my life, and I in theirs, although we have never met.’