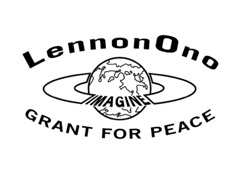 RECIPIENTS OF YOKO ONO’S 2016 LENNON ONO GRANT FOR PEACE TO BE PRESENTED THE AWARD IN REYKJAVIK, ICELAND ON JOHN LENNON’S BIRTHDAY, SUNDAY OCTOBER 9

Three of the recipients of the 2016 Lennon Ono Grant For Peace, announced by Yoko Ono earlier this year, will be travelling to Reykjavik, Iceland to be presented the award on John Lennon’s birthday – October 9.

Ai Weiwei, Anish Kapoor, Katalin Ladik and Olafur Eliasson have also announced which charities they have chosen to receive the grants although Ai Weiwei will not be available to go to Iceland to receive his in person. See their charities of choice below:

AI WEIWEI (Chinese artist and activist b. 1957 in Beijing, China):

Hungarian Interchurch Aid – Katalin Ladik’s chosen cause – is one of Hungary’s largest charity organisations and pays special attention both to support services that provide assistance to victims of intimate partner violence, child abuse and also to prevention, awareness raising and shaping attitudes in these issues. www.segelyszervezet.hu

Olafur Eliasson nominated Maternity Foundation, a Danish development organisation that works to save the lives of women and babies threatened by complications in pregnancy and childbirth. Under the motto: “No woman should die giving life,” Maternity Foundation has co-developed The Safe Delivery App, an innovative mobile health tool that teaches birth attendants across Africa and Southeast Asia to save the lives of mothers and babies in childbirth. www.maternity.dk

Yoko Ono inaugurated the Lennon Ono Grant For Peace in 2002, and since 2007 has travelled to Iceland to lead ceremonies commemorating John Lennon on October 9, his birthday. On that day she illuminates IMAGINE PEACE TOWER, a vast tower of light, which is situated on the island of Videy. The tower is lit from that day until the day of Lennon’s death, December 8.

Yoko said of the four recipients; “I am so proud to see such deserving recipients and causes chosen to receive this year’s grants. These people and organisations work tirelessly to try and improve our fragile world by fostering peace, education, health and aid to those most in need of it and should be given our love, attention and gratitude if we are truly devoted to peace and hope across the world.”