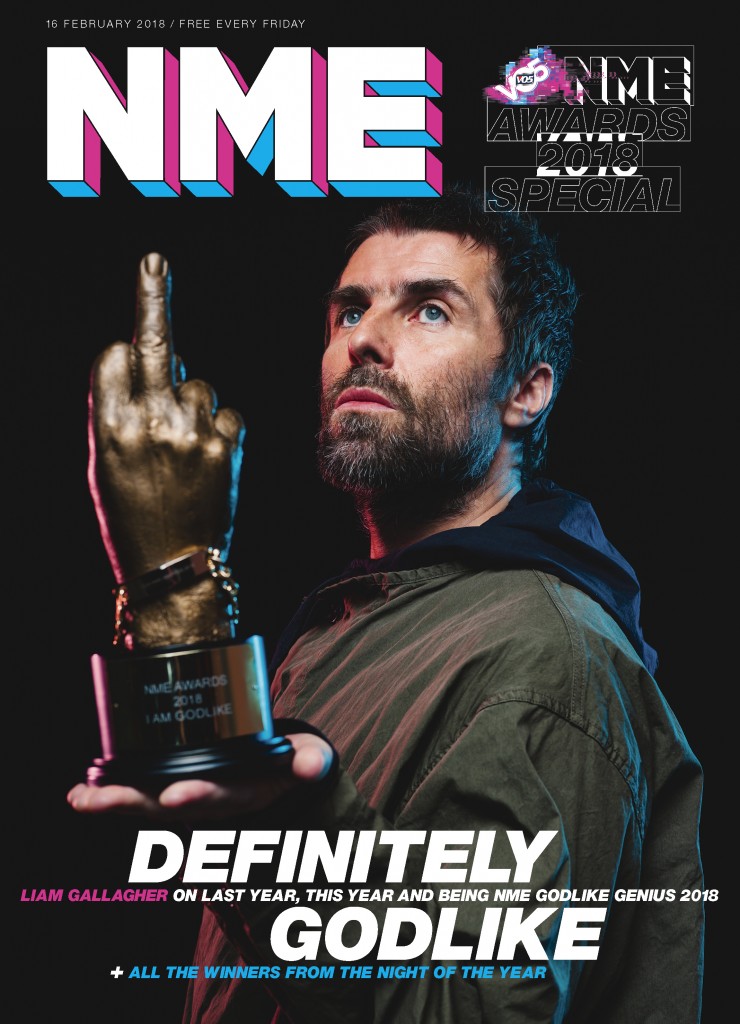 CREDIT – The quotes below must be credited to NME, along with the copy “Liam Gallagher was awarded Godlike Genius at the VO5 NME Awards.” ON HIS CHRISTMAS ‘PATCH-UP’ WITH NOEL

“In my head [we called a truce]. ’Cos it’s Christmas innit and me mam’s always going, ‘Look, calm down,’ so I had a couple of drinks and thought, you know, I’ll put it out there. But it’s not happening, is it?”

ON THE RUMOUR THEY PATCHED THINGS UP AT CHILTERN FIREHOUSE

“No, no – I went there and he wasn’t there. He wasn’t meant to be there, but that’s where him and all his posh mates go, so I thought I’d steam down there and see what they gotta say. I just went down there lookin’ for a bit of trouble and that but there was none of ’em about. They were all probably at home, counting their money…We’ve not made up.”

ON HIS FAILURE TO REFORM OASIS

“I might have been drunk and rung ’em up and gone, ‘Shall we do something?’ I said, ‘We’ve all gotta do it’. We’d have to get someone to do Noel’s parts, which wouldn’t be hard. It would have been good. But they’re all happy doing what they’re doing, so they blanked me. Well, Bonehead was up for it.”

ON HIS HATRED OF THE TERM ‘ARTIST’

“I mean, I wouldn’t say I’m a solo artist. That word ‘artist’ gets on my t**s. I’ll leave that for the likes of Paul Weller and f**king Noel Gallagher. I still feel like I’m a rock’n’roll singer in a band, d’you know what I mean?”

“Well, I didn’t write any of Oasis and that seemed to work…I feel more comfortable when I’m singing. I’m not a songwriter – I don’t know how it works, but I can do my little bit.” “[Manchester City striker] Sergio Agüero doesn’t defend – he might not be an all-round footballer – but he still puts the ball in the back of the f**king net. And that’s how I’m seeing it. So get that down your f**king neck, Noel.”

“I done it once and I got stuck. The little geezer was laughing at me, so I thought, ‘I’m taking my mat and I’m off.’”

“I wouldn’t say we’re ‘cool now, I apologised on the night because it was the right thing to do with what’s gone down and that. It was only banter anyway. I apologised and we moved on. But we don’t go out running together and do yoga together, or eat ice cream together.”

“Right, I’m sure he does. It’s not happening, is it? Fair play to him, he’s got his kids now and all that stuff’s under the bridge. We grow up and do our thing, but I don’t think me and him singing together would be a wise move.”

ON HIS DOUBTS RE: SOLO ALBUM ‘AS YOU WERE’

“I thought the album might bomb…that people might have had enough of me and I’d have to start f**king sewing at Pretty Green [his fashion label]. If the album bombs, you can’t do gigs. The second Beady Eye one didn’t f**king work. The gigs were getting smaller. That’s why we knocked it on the head. There was no point doing a third one – we’d be playing f**king pubs.”

ON GETTING THE NME GODLIKE GENIUS AWARD SIX YEARS AFTER NOEL

“You can’t give it to one without the f**king other, man! I was like, ‘You cheeky f**king c**ts, man.’ But all is forgiven. Two Godlike Geniuses in my family – and then people wonder why we don’t f**king speak… Save the best ’til last, mate.”

ON WHAT FANS CAN EXPECT FROM HIS SECOND SOLO ALBUM

“A bit more in-yer-face. Less apologetic. I’d love to do a proper out-and-out punk rock album – a bit Pistols, a bit Stooges. I can do that gear; I can definitely sing ’em. Some of the sing-y songs are a bit of a struggle when I do ’em live. But the lippy ones I can do all day long. The ones where you spit ’em out. You’re not necessarily singing, you’re just f**king screaming and shouting. I’m all for that.”

NO POTATO PEELERS AT PARKLIFE

“It’s a shame they’ve been banned, man. They’re good for chopping things out and that…it’s not all about peeling potatoes, is it?” NME is one of the UK’s most famous and influential youth brands, turning young people on to the music and culture that will change their lives since 1952. Initially a weekly newspaper, NME now reaches 10 million people via the website, and another 150 million via social and offsite distribution, video channels, live events and the free weekly magazine. NME is celebrated for talking about music and being experts in the field, but that’s only on part of the story. Whether it’s film, TV, food, politics, career development, social issues or Pokemon, if the NME audience is into it, NME is all over it. From #lifehacks to Eats & Beats to the world-renowned NME Awards, NME has a growing portfolio of channels, events and franchises that help us deliver timely and relevant content to the NME audience and connect commercial partners with this switched on and savvy generation.

Heads Up: At VO5 we believe hair shouldn’t be dull, life shouldn’t be boring and you should never restrict your self-expression. We encourage our stylers to have their hair in constant beta mode, to experiment, fail and learn but never leave it as it is. We want to create a world of hair play! As the UK’s number one styling brand*, VO5 brings you a full array of trusted high quality products, which allow you to create, experiment and play with your style. *Based on Nielsen ScanTrack (Total UK, excluding NI) data for Hair Styling, 52-weeks to 22nd April 2017 (Copyright © 2017, The Nielsen CompanyVO5 Instagram – @VO5