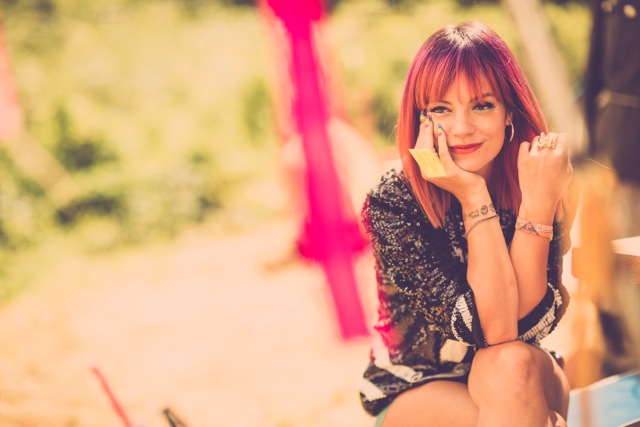 LILY ALLEN FILMED HER HUGELY CELEBRATORY VIDEO FOR HER NEW SINGLE ‘AS LONG AS I GOT YOU’ (TAKEN FROM THE NO 1 ALBUM ‘SHEEZUS’) AT GLASTONBURY THIS YEAR.

THE VIDEO INCLUDES CAMEOS FROM VARIOUS GLASTONBURY REVELLERS. THE SINGLE IS AVAILABLE TO DOWNLOAD NOW.

Lily Allen has revealed the video for her new single ‘As Long As I Got You’, which was filmed at this year’s Glastonbury Festival where Lily performed on the Pyramid stage, her first appearance at the festival for 5 years. The last time Lily played at Glastonbury was when she met her husband Sam, and the video serves as a celebratory and poignant reminder of how Lily’s life has changed so much, now that she returns to the festival with her husband and two children.

Lily said: “Glastonbury has always been a huge part of my life, and I wanted to make this video there to celebrate the spirit of the festival and also to show how my life has changed since the last time I played there. From being there as a child with my Dad, to my wilder days in the 2000s, to this year when I was back on the Pyramid stage, and taking my husband and own daughters along!”

‘As Long As I Got You’ is taken from Lily’s current number one album ‘Sheezus’, and is available to download now. “Sheezus” includes three top 10 singles including the No 1 hit “Somewhere Only We Know”, “Hard Out Here” (No 9) and “Air Balloon” (No 7).