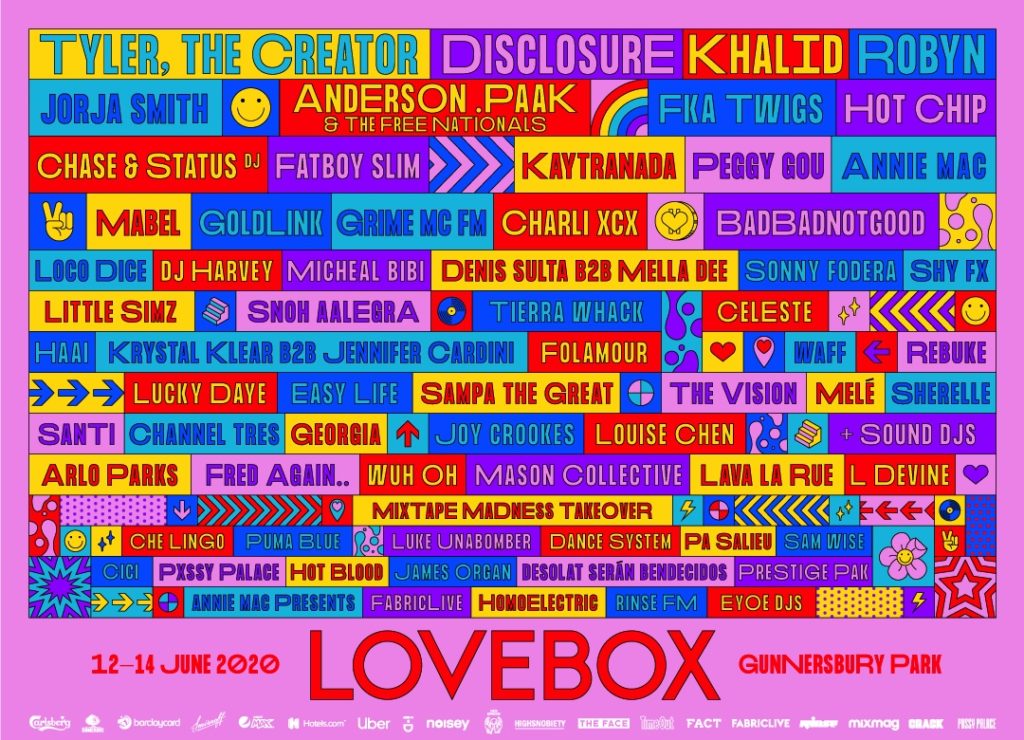 Joining this year’s line-up is none other than five time Grammy Award-nominated pop icon Robyn, whose most recent album Honey was deemed ‘beautifully personal pop perfection’ by The Guardian in a five star review. Canadian DJ and producer Kaytranada will return to Lovebox for a Friday slot, to kick off the weekend’s proceedings in style, hot off the back of his new album Bubba. American artist Tierra Whack, known for her eccentric visuals and playful lyrics, and legendary British DJ Fatboy Slim also join the line-up today.

For 2020, Lovebox is celebrating its 18th birthday by bringing some of the biggest and best acts from the electronic and dance worlds to its stages. Denis Sulta will make a return to Gunnersbury Park playing with fellow DJ and producer Mella Dee. BRIT Award-winning electronic music duo Chase & Status play a special DJ set on Friday on the newly-formed FABRICLIVE stage as well as Shy FX and JME. Radio 1’s Annie Mac will bring her trademark high-energy style to Sunday’s proceedings while Sonny Fodera, Michael Bibi and Loco Dice also play across the summer weekend.

Manchester’s Homoelectric will be coming to Lovebox for the first time, hosting a stage of incredible acts on Sunday. Producer and founder Luke Unabomber will open the stage, leading onto hotly-tipped French acts Folamour and Louise Chen – DJ and founder of female DJ collective and club night ‘Girls Girls Girls’. Krystal Klear will play a special B2B set with Jennifer Cardini and closing the night will be none other than disco music hero DJ Harvey.

For the full line-up visit https://loveboxfestival.com/.

Lovebox Festival is a 3-day music event which takes place in June at London’s Gunnersbury Park. It brings in thousands of festival-goers each year to see artists from the worlds of house, techno, pop, hip-hop, R&B and grime.

Founded in 2002 as an East London club night, Lovebox has since grown from an underground cultural movement to one of the UK’s biggest and most exciting music events of the year. The past 18 years have seen Lovebox cement its reputation for curating incredible, genre-spanning line-ups that include both household names and up-and-coming talent.