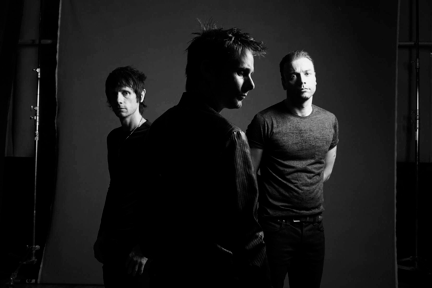 DEAD INSIDE, THE FIRST SINGLE FROM THE ALBUM RELEASED WEEK OF MARCH 23. Matt Bellamy said today, “To me, ‘Drones’ are metaphorical psychopaths which enable psychopathic behaviour with no recourse.  The world is run by Drones utilizing Drones to turn us all into Drones.  This album explores the journey of a human, from their abandonment and loss of hope, to their indoctrination by the system to be a human drone, to their eventual defection from their oppressors.”

The first single from the album, “Dead Inside”, will debut the week of March 23rd. The band will premiere the album track “Psycho”, via their YouTube channel at 6:00pm GMT on 12 March.  The song will be available worldwide immediately when pre-ordering the album Drones, beginning at 7:30PM GMT that same day.

Muse have sold 17 million albums worldwide.  Their last album “The 2nd Law” was released in October 2012 and topped the chart in 21 countries including the UK. The album was their highest ever debut in the USA, entering the chart at No 2.

Praise for the album included:

“A high watermark in their creative ambition”    Q