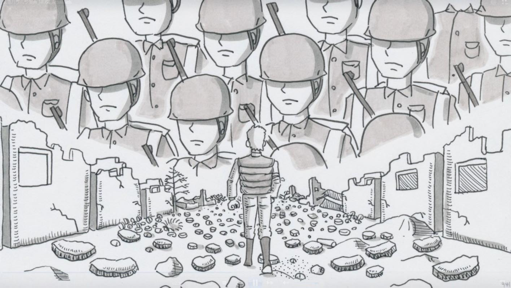 THE BAND ARE SET TO HEADLINE FRIDAY NIGHT AT GLASTONBURY FESTIVAL

“Muse’s status as the last of the great arena rock bands remains undiminished.” – Billboard, US

Muse have unveiled a striking new video for their single ‘Aftermath’. The video is the result of Muse’s on-going creative collaborations with Japanese director Tekken, who previously delivered eye-catching, flipbook-style animated videos for the band’s tracks ‘Follow Me’ and ‘Exogenesis: Symphony Part 3 (Redemption)’. The hand-drawn, monochromatic video for ‘Aftermath’ charts the experiences of a soldier after being parted from his family.

Muse’s current world tour in support of their seventh album ‘Drones’ is being heralded as one of the greatest arena shows of the modern era, with many critics praising the band’s explosive combination of thrilling musical ambition and jaw-dropping visuals. The European leg of the tour is firmly underway with five sold-out nights at London’s 21,000 capacity O2 and six sold-out nights in Paris already completed.

‘Drones’ has seen the band enjoy a phenomenally successful seventh chapter to their career. Released to some of their strongest reviews to date, ‘Drones’ topped the charts in 23 different countries including their first ever US #1 album. The album also saw the band earn their second Grammy Award for Best Rock Album.

The remainder of Muse’s tour continues with dates including a six-night run in Milan and festival headline shows all over the continent. In addition, Muse will also continue their storied relationship with Glastonbury where they’re set to play their third headline set of their career on the Friday night – having previously headlined on the Saturday (2010) and Sunday (2004), Muse will be the first band to have headlined the festival’s Pyramid Stage on all three nights.

Tickets are available from http://muse.mu/tour-dates.htm