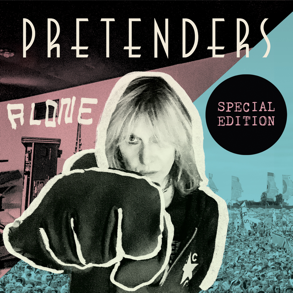 THE SPECIAL EDITION ALBUM WILL INCLUDE A LIVE BONUS DISC

PRETENDERS WILL EMBARK ON A HEADLINE UK TOUR THIS AUTUMN, OPENING ON SEPTEMBER 30 AT NEWCASTLE’S CITY HALL

The special edition album will include a bonus live CD of fifteen live versions of classic Pretenders tracks as well as material from ‘Alone’. The bonus disc includes ‘I’ll Stand By You’, live from this year’s Isle of Wight festival and ‘Don’t Get Me Wrong’ live from Glastonbury earlier this year.

Chrissie Hynde originally recorded ‘Alone’ in Nashville with Dan Auerbach, from The Black Keys, who worked as producer and multi-instrumentalist on the record. The record was originally released on October 21st 2016 to critical acclaim with Uncut saying, “It’s a wonderfully bloody-minded riposte to the clichés of rock’n’roll from one of the genre’s undersung greats”. The record also received 4* reviews from Q, MOJO, The Evening Standard and The Guardian.

Of ‘Alone’, Chrissie Hynde said the following: “This record is what I love the most – real people playing real music. I sang and recorded every vocal in a 48-hour period – 48 hours to sing them, 40 years of preparation!”

Pretenders will embark on a UK headline tour this autumn. Opening in Newcastle on September 30 at City Hall, the band will be performing at concert halls across the UK including London’s Eventim Apollo and Manchester’s O2 Apollo before closing in Oxford on October 18 at the New Theatre.