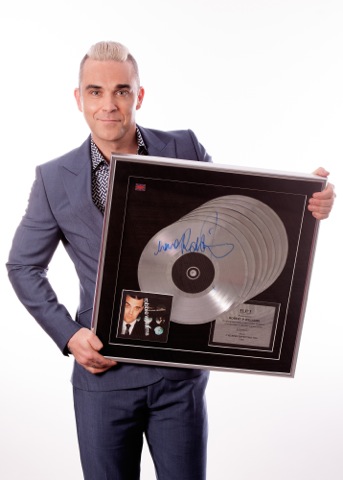 Robbie Williams – in conjunction with Bonhams – is spearheading a charity auction titled “Doing it for the Kids” on July 15 at 3pm.  Proceeds of the sale will be donated to children’s charity The Donna Louise Children’s Hospice, of which Williams is a patron.

“It’s a privilege for me to be a patron of The Donna Louise Children’s Hospice; it makes a real difference to these children whose lives have been tragically limited. The sale gives a great opportunity for bidders to know their money will go to such a fantastic charity, whilst also taking home some of my most prized possessions that have been personal markers of my career and life so far,” said Williams.

Robbie, who has sold over 60 million albums during his solo career and won more BRIT Awards than any other artist in history, has provided a selection of over 150 personal artefacts for the auction.  The items to go under the hammer at Bonhams Knightsbridge include awards, stage costume and handwritten lyrics from across Robbie’s whole career, dating back to the early 1990s. Items featured in the sale include:

Viewing of the items will be at the following times:

Bonhams Robbie Williams Charity Sale “Doing it for the Kids” will be streamed live via the Bonhams website.

Entry to the Bonhams sale is by catalogue purchase only.  To order the catalogue at a reduced rate, fans can visit the RobbieWilliams.com site here:  http://po.st/rwauction (All proceeds going to The Donna Louise Children’s Hospice)

To order a catalogue direct from Bonhams:

To register to bid: