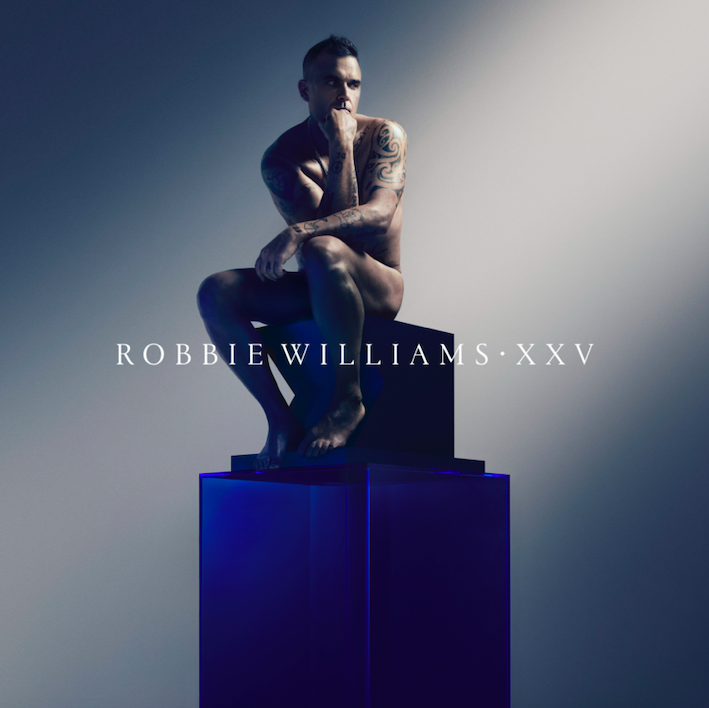 THE ALBUM IS OUT SEPTEMBER 9 ON COLUMBIA RECORDS

Robbie Williams has today announced the release of ‘XXV’ on Columbia Records on September 9. The album is available to pre-order now.

Celebrating 25 years of Robbie as a solo artist and featuring countless Number 1 smash hit singles and fan favourites, the tracks have been newly orchestrated by Jules Buckley, Guy Chambers and Steve Sidwell, and re-recorded with the acclaimed Metropole Orkest in The Netherlands. ‘XXV’ will be available in CD (standard and deluxe), vinyl and cassette formats. The new version of ‘Angels’ is available today, listen to the song here.

Both the standard and deluxe albums will feature the brand new track ‘Lost’ – a moving song in classic Robbie style with poignant lyrics, piano elements and soaring strings.  The deluxe album will feature three more original tracks – ‘Disco Symphony’, ‘More Than This’, and ‘The World And Her Mother’.

After huge success with Take That, Robbie kicked off his solo career 25 years ago in 1997 with the release of his debut album, ‘Life Thru A Lens’, and quickly became renowned for a combination of great songs, enthralling live shows, and a charming and fun personality that won him more fans around the world. The record was Robbie’s first UK Number 1 album of his solo career and the smash hit singles included on ‘XXV’ are ‘Let Me Entertain You’, originally released with its iconic black and white music video with Robbie wearing a bejewelled jumpsuit and monochrome make-up, and the legendary ‘Angels’, which catapulted Robbie to international fame as a solo artist and remains his biggest-selling single to date.

The new album also includes ‘Millennium’ – Robbie’s first solo UK Number 1 single, the Top 10 hits ‘Strong’ and ‘No Regrets’, and his second solo UK Number 1 hit, ‘She’s The One’ – all released on his 1998 album, ‘I’ve Been Expecting You’. From the 2000 album ‘Sing When You’re Winning’, ‘Supreme’, ‘Kids’, the anthemic duet with Kylie Minogue, ‘Rock DJ’, released with an innovative video, and ‘The Road To Mandalay’ all feature on ‘XXV’. Other hit songs included on the new record are ‘Feel’ and ‘Come Undone’, both released in 2002 on Robbie’s fifth consecutive UK Number 1 album ‘Escapology’, as well as ‘Candy’, which hit the UK Number 1 spot in 2012.

Robbie says: “I’m so excited to announce my new album ‘XXV’ which celebrates many of my favourite songs from the past 25 years. Each track has a special place in my heart so it was a real thrill to record them again with the Metropole Orkest. Can’t wait for you all to hear it.”

‘XXV’ is another huge milestone in the glittering career of one of the world’s most decorated artists. Robbie has six of the Top 100 best-selling albums in British history, has sold a huge 80 million albums worldwide, achieved 14 Number 1 singles and a record 18 BRIT Awards – more than any other artist in music history. Other UK Number 1 albums include his swing covers special ‘Swing When You’re Winning’, 2016’s ‘The Heavy Entertainment Show’, and most recently ‘The Christmas Present’, released in 2019 which secured Robbie his 13th UK Number 1 album – equalling Elvis Presley’s chart record as the solo artists with the most UK Number 1 albums. Robbie’s total chart-topping albums across his solo work and with Take That is 17, placing him in the top three acts of all time with the most Number 1s across their catalogue.

Robbie has also raised £60 million to date for charity through co-founding Soccer Aid for UNICEF since 2006 and this month launched his debut art collection with Ed Godrich, ‘Black and White Paintings’, which were unveiled at Sotheby’s. He will perform the new version of ‘Angels’ during the half-time show at this year’s Soccer Aid which takes place on June 12 and will air on ITV.

The full track-listing for ‘XXV’ is:

The deluxe album additions are:

The album is available to pre-order now.