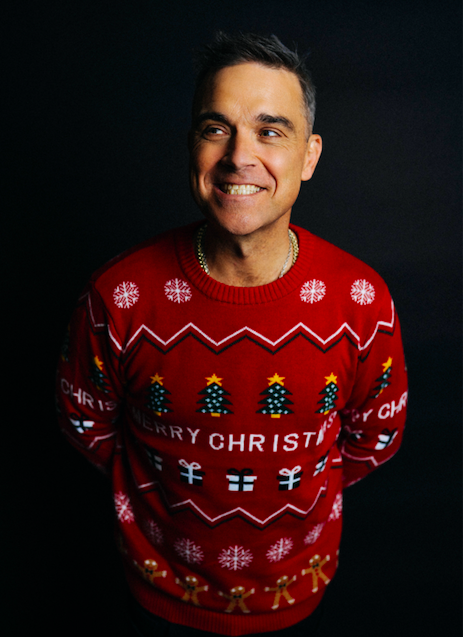 On ‘The Christmas Present’ album –

“An album that Williams has surely been destined to make.” **** – The Sun

“‘Bad Sharon’ Is the Christmas Song of the Century.” – Vice

“The pop don’s festive gift is anything but a lump of coal.” – NME

Sure to make spirits soar, ‘Can’t Stop Christmas’ is a fun take on the traditional Christmas song with cheeky lyrics reflecting on an unprecedented 2020 complete with an upbeat melody and seasonal jingle bells.

The new single sees Robbie working once more with long-time producers Guy Chambers and Richard Flack. Including 2020 nods to Facetimes and Zooms, socks and hand sanitisers as perfect Christmas gifts, online shopping and social distancing: “Santa’s on his sleigh, but now he’s two metres away.” Robbie captures Christmas 2020 for us all; replacing fear with hope. Watch the official lyric video here.

The single is taken from the critically acclaimed ‘The Christmas Present’ – Robbie’s most recent and first ever Christmas album which is out now. The double album features a brilliant mix of original songs and special festive covers featuring star guest appearances including Rod Stewart, Bryan Adams, Jamie Cullum and Tyson Fury. The album gave Robbie his 13thNumber 1 solo album last December, meaning he reached the amazing feat of equalling Elvis Presley’s chart record as the solo artist with the most UK Number 1 albums. The record is available in CD (standard and deluxe), vinyl and cassette formats and available to stream here.

The full deluxe album track-listing is:

Robbie is one of the most decorated music artists in the world with six of the Top 100 best-selling albums in British history, a huge 80 million album sales worldwide, 14 Number 1 singles and a record 18 BRIT Awards – more than any other artist in music history.  Robbie’s total chart-topping albums across his solo work and records released with Take That is 17. It places him in the top three acts of all time with the most Number 1s across their catalogue.