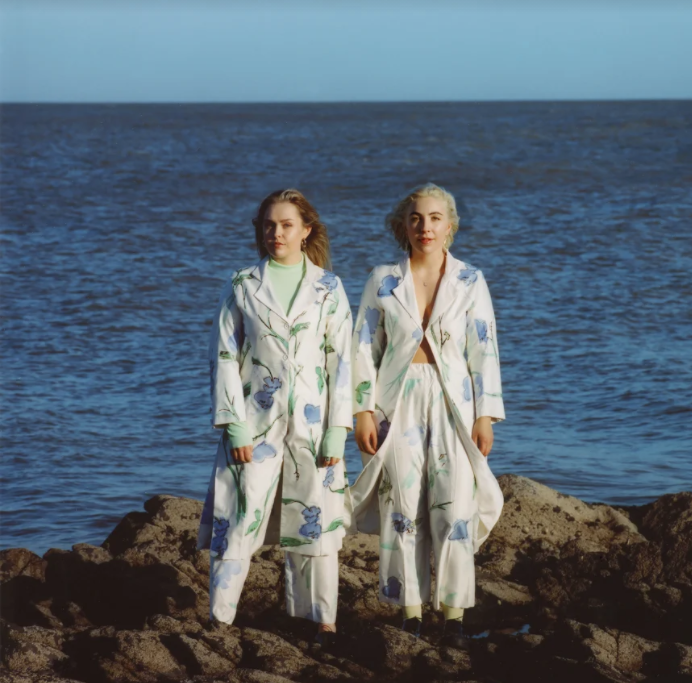 THEIR BRAND NEW ALBUM ‘WHERE I SHOULD END’ IS OUT NOW

THE BAND WILL PLAY LONDON’S OSLO ON NOVEMBER 9

WATCH THE OFFICIAL VIDEO FOR ‘ANY DREAMS?’ HERE

‘Saint Sister makes the sort of music I’ve been fascinated with for much of my life, music that mixes the organic with the electronic…That blend is at the heart of my passion for Saint Sister’ – NPR / Bob Boilen

Rising duo Saint Sister release their new single ‘Any Dreams?’, taken from their brand new album ‘Where I Should End’, out today. Accompanying the track is its official video, also released today.

New single ‘Any Dreams?’ opens with a striking synth beat that serves as a measure of pace throughout the song. The track serves as the album closer and brings listeners through a melancholy tour of a familiar city drained of all life and colour.

“The song moves along at a concentrated pace. It’s quite focused and forensic in its dissection of what you’ve been clinging onto, what’s been keeping you alive. All of a sudden the pace runs away with itself. You can’t keep up, you can’t cope and you’re about to fucking spin out of control.”

“We wanted to examine the experience of feeling trapped. Trapped in a relationship, trapped in our houses and trapped in our minds. This video explores the patterns we move in, the safe places we seek and what we do to find escape.”

Saint Sister’s sophomore record ‘Where I Should End’ is an incredibly hands-on project, with every track written, arranged and produced by the band. The 10-track body of work features layered synths, drum machines, harps and strings (performed by Crash Ensemble), piano and other live band components, revealing an elevated sound for the band. ‘Where I Should End’ also showcases the band’s most honest songwriting to date – covering a range of topics from coming of age and heartbreak to telling the story of a young couple travelling to the UK in order to receive adequate healthcare. Lead singles from the album include ‘Karaoke Song’, ‘Dynamite’ and ‘The Place That I Work’ featuring Lisa Hannigan, ‘Oh My God Oh Canada’ and most recent single ‘Manchester Air’, which received support from tmrw magazine, Folk Radio and Clash, which deemed the track ‘a hugely atmospheric piece of music’.

‘Where I Should End’ was recorded at The Meadow Studio, Co. Wicklow with Rian Trench and mixed in Berlin with Benedikt MacIsaac. It follows Saint Sister’s debut record ‘Shape of Silence’, released in October 2018 to critical acclaim and nominations for Album of The Year at both the 2018 RTE Choice Music Prize and the Northern Irish Music Prize.

Recently Saint Sister announced their new UK / Ireland tour dates for Autumn 2021, including a show at London’s Oslo on November 9. Full tour dates and tickets are available at www.saintsisterband.com

Listen to the new album ‘Where I Should End’ in full here.