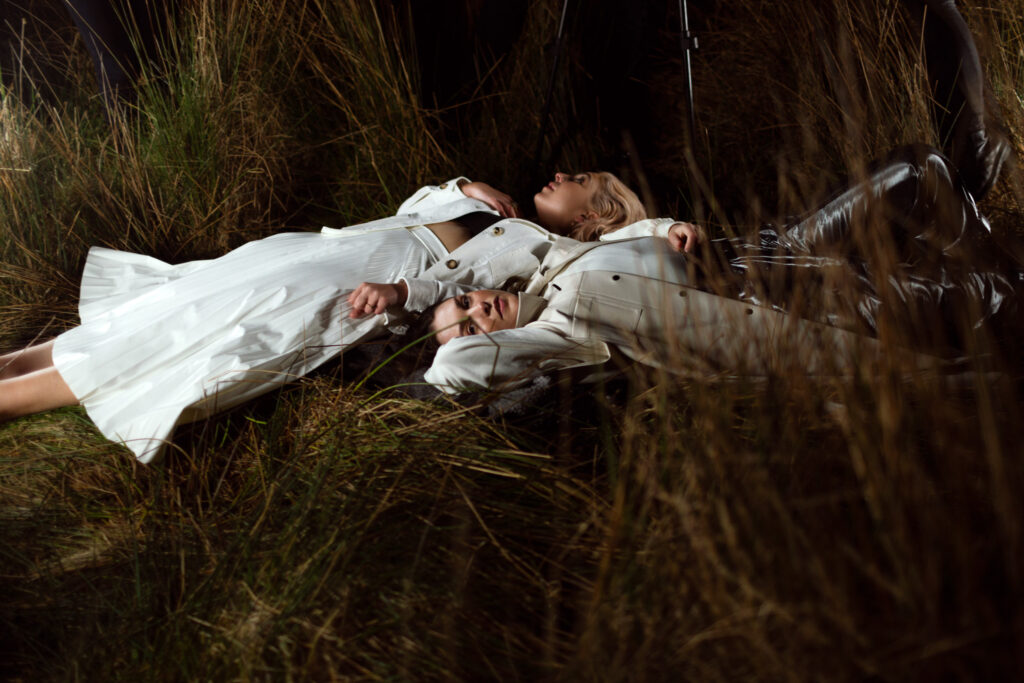 Saint Sister—the Dublin-based duo of songwriter Morgana MacIntyre and harpist/arranger Gemma— today reveal their brand-new single “Oh My God Oh Canada” from their forthcoming sophomore album ‘Where I Should End’, to be released on June 25. The official video is also out today, watch it here.

Written as they were touring their 2018 debut ‘Shape of Silence’ in North America, the song paints a clear picture of the care that goes into maintaining relationships when you’re living out of a suitcase.

“‘Oh My God Oh Canada’ is about the intricacies within your most cherished and complicated relationships. It’s about not knowing where the line is, finding yourself on the wrong side of it and spending months trying to find your way back to the right place,” explains MacIntyre. “It’s about saying too much and at the same time, nothing at all, giving too much of yourself in one moment but not showing up when you’re needed most. I wrote it about wanting to be a better friend, but knowing I never would be.”

The video, produced by Algorithm Dublin and directed by Janna Kemperman and Kevin Freeney, was shot in County Wicklow, where the album was recorded. Speaking about the film, the directors said: “It’s easy to take the nature that surrounds us for granted. For this video, we wanted to highlight the beauty of the Irish landscape. By creating abstract lighting setups we want the viewer to observe nature in a different way and to cherish it.”

The track follows the March release of “Karaoke Song,” as well as previous singles “Dynamite” and “The Place That I Work” (ft. Lisa Hannigan), which were both released last year.

‘Where I Should End’ is an incredibly hands-on project, with every track written, arranged, and produced by the band, and sees MacIntyre and Doherty confidently evolving into their distinct roles as songwriter and producer. Layering synths and drum machines with harp, strings (performed by Crash Ensemble), piano, and other live band components, ‘Where I Should End’ —recorded at The Meadow Studio, Co. Wicklow with Rian Trench and mixed in Berlin with Benedikt MacIsaac—opens new sonic avenues for Saint Sister, while showcasing their most honest songwriting to date.

Hailing from the north of Ireland, MacIntyre and Doherty met in Dublin in 2014, before going on to release their debut EP ‘Madrid’ the following year. ‘Where I Should End’ follows their debut album ‘Shape of Silence’, which received critical acclaim and nominations for Album of The Year at both the 2018 RTE Choice Music Prize and the Northern Irish Music Prize.

Following its release, Saint Sister toured extensively through Europe and the U.S., including their biggest stateside tour to date with Keane in 2020, unfortunately cut short due to COVID-19. The band have also supported Hozier and Lisa Hannigan on their international tours, and filmed a debut NPR Music Tiny Desk Concert. Speaking of the concert, NPR’s All Things Considered host Bob Boilen said: “Saint Sister makes the sort of music I’ve been fascinated with for much of my life, music that mixes the organic with the electronic…That blend is at the heart of my passion for Saint Sister.”

‘Where I Should End’ is now available for pre-order. Listen to “Oh My God Oh Canada” here.