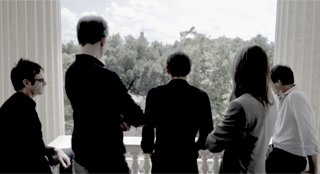 Suede are delighted to announce that the band are the subject of a major new definitive feature-documentary.‘Suede: The Insatiable Ones’ was commissioned by Sky Arts, produced by ChristieHQ, and is a Sky Arts and BMG Films co-production.

Set to premiere on 24th November at 9pm on Sky Arts, the film was conceived by the acclaimed director Mike Christie. Christie’s film-making career actually began while working with Suede, after meeting them during the band’s 1993 collaboration with Derek Jarman. His recent work includes the music feature Hansa Studios: By The Wall 1976-90 and the forthcoming film New Order: Decades.

Speaking about how Suede: The Insatiable Ones came together, Christie explains:

“One of many things I’ve learned in two decades of documentary making is that some stories can’t be told until they’re ready to be told. We’d debated making a film before but this time was absolutely the right time. This is a band who are once again at the peak of their artistic powers and only now in the right place to reflect deeply on their lives, past and work with brutal honesty. And coupled with the extraordinarily extensive video archive of drummer Simon Gilbert, we don’t just hear about the intense highs and lows – we see them…”

Suede: The Insatiable Ones arrives 25 years after the release of their monumental first album Suede, and in the wake of their brilliant new opus The Blue Hour, set for release on 21st September.

The film, for which there will be a premiere in London on 20th November, was made with full access to the band and their extensive personal archives, helping to tell the story with unprecedented insight. Pulling no punches, the documentary explores the highs and lows of Suede’s career – their roots and identity, the media frenzy that surrounded their first album, as well as the subsequent, infamous tensions that led to a major split within the group. Also explored are the international, critical and commercial achievements enjoyed by their reinvented line up with the 1996 album Coming Up, the impact of that success and subsequent excess, and ultimately their 2003 split and recent acclaimed rebirth.

“There is no one better placed to make the definitive Suede film than Mike Christie. He’s been there with us almost from day one, pointing a damned camera in our faces. This isn’t a powder-puff promotional tool, it’s a film that grasps at the very essence of what the band is, charting the scruffy inglorious years of struggle, the vertiginous heights of success and the dank depths of self-destruction and hopefully emerges at the end of it all with some truths revealed and some myths destroyed”.

Sky Arts is the UK’s only dedicated channel for the arts. It offers something for everyone, whatever their passion, with entertaining programmes showcasing the best of classical and popular music, theatre, opera, dance and the visual arts, as well as original drama and comedy. Sky Arts is broadcast 24 hours a day and has over 1,000 hours available on catch-up TV, including flagship programmes such as Portrait Artist of The Year, Landscape Artist of the Year and The South Bank Show. The channel is committed to supporting the arts by investing in the best talent, both on and off screen, as well as through exclusive partnerships with major UK and European cultural institutions, including National Theatre Live, Tate and The British Library.

BMG is the new model music company founded by Bertelsmann in 2008, which brings together the traditionally separate businesses of music publishing and recordings under one roof and is increasingly building a presence in music related film and TV projects. BMG Films first feature-length documentary Bad Reputation, a film on Joan Jett, had its world premiere at the 2018 Sundance Film Festival. The film was acquired by Magnolia Pictures and will be in commercial release in 2018. Additional BMG films coming soon include the captivating new film Rudeboy: The Story Of Trojan Records; The Show’s The Thing – a documentary about the legendary promoters and agents who built the rock concert business in the ‘60s through the explosive business of the ‘90s;  and an in-production documentary on the life and times of David Crosby, produced by acclaimed Academy Award winning filmmaker Cameron Crowe.

ChristieHQ is the UK based production company founded by the award-winning producer/director Mike Christie, who over the course of the last two decades has helmed a vast and eclectic range of very well-known films from Jump London and Jump Britain for Channel 4, The Art of China and Sir Alex Ferguson: Secrets Of Success for the BBC, and the Grierson-shortlisted Hansa Studios: By The Wall 1976-90 for Sky Arts, as well as shortform work including Danny MacAskill’s Imaginate, viewed 87 million times, and notable films for Apple and London 2012 Ceremonies.

Worldwide TV distribution rights for Suede: The Insatiable Ones are represented by Andrew Winter at Special Treats.