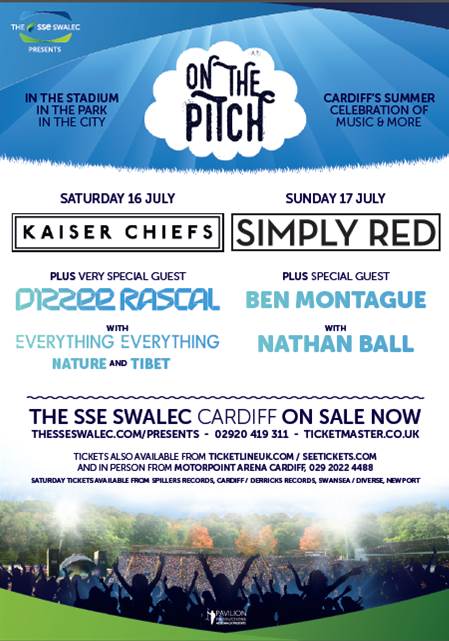 THE SSE SWALEC PRESENTS 'ON THE PITCH’

LINE UP INCLUDES KAISER CHIEFS, SIMPLY RED, DIZZEE RASCAL, EVERYTHING EVERYTHING AND MORE

The SSE SWALEC announces the launch of ‘On The Pitch’, Cardiff’s summer celebration of live music on 16 and 17th July at the home of Glamorgan County Cricket Club. Chart-topping acts Kaiser Chiefs, Dizzee Rascal, Everything Everything, Nature and Tibet will take to the stage on Saturday 16th July and Simply Red, Ben Montague and Nathan Ball will perform on Sunday 17th July.

Headlining On The Pitch – Saturday will be Kaiser Chiefs, performing their anthemic collection of hits including ‘Oh My God’, ‘I Predict A Riot’, ‘Coming Home’, ‘Everyday I Love You Less And Less’, ‘Ruby’ and ‘Never Miss A Beat’, which have formed the backbone of Kaiser Chiefs live shows in recent years. The multi-million record selling, Brit Award winning band are currently working on their 6th studio album. Fronted by Ricky Wilson, who enjoyed a fresh rise to prominence in his role as a winning coach on The Voice, Kaiser Chiefs’ recent outdoor gigs Summer 2016 have sold-out in record time.

Dizzee Rascal will bring his crowd-pleasing brand of rap, pop and grime in to the early evening slot with an extensive hit list that includes ‘Bonkers’, ‘Dance Wiv Me’, ‘Fix Up Look Sharp’ and  ‘Holiday’. A past-winner of the Mercury Music Prize, his critically acclaimed debut album Boy In The Corner paved the way for mainstream stardom in collaborations with Armand Van Helden and Calvin Harris.  Indie-rock band Everything Everything are also on the bill with further acts to be added to the celebration of music.

“We always love playing outdoors and we’ve played fields, parks, farms, rooftops, beaches and back gardens, but an international cricket pitch is a first for us. We always enjoy playing in Wales, we’re looking forward to this show.” said Ricky Wilson.

Headlining On the Pitch – Sunday will be the legendary Simply Red. The only back-to-back winners of the Brit Award for Best British Act, Simply Red have sold more than 60 million records and are celebrating 30 years in music with a world tour that now includes the Welsh capital at The SSE SWALEC’s On The Pitch.

As the band enters its fourth decade, buoyed by the excellent new album ‘Big Love’, their reputation as one of the great British groups is set for some timely enhancement as they perform their greatest hits such as; ‘Money’s Too Tight (To Mention)’, ‘Holding Back The Years’, ‘If You Don’t Know Me By Now’, ‘Something Got Me Started’, ‘The Right Thing’, ‘Stars’, ‘Fairground’, ‘Angel’ and ‘Sunrise’.

Venue Chief Executive Hugh Morris hopes that the bill offers exceptional value for ticket buyers and further strengthens the credentials of the historic home of Welsh cricket as a concert venue. Speaking of On The Pitch, Hugh said: “Our vision was to secure a bill of top talent and to provide a festival feel for a summer Saturday crowd – we’re delighted to have secured such prestigious acts to play at The SSE SWALEC and we look forward to welcoming them to Wales.”

On the Pitch Saturday and Sunday are separately ticketed events.

THE SSE SWALEC PRESENTS 'ON THE PITCH'