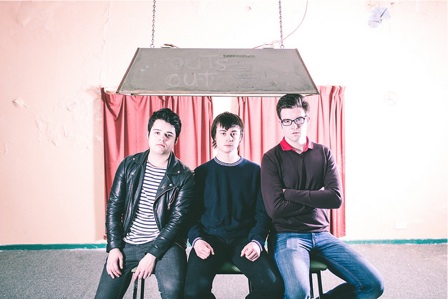 TOUTS have today announced a UK co-headline tour with Vistas, a run of live shows across the UK throughout September and October, starting in Bath on 27th September. The tour also includes dates in Brighton, Liverpool, Manchester, London before concluding in Newcastle on 12th October.

The punk three piece, who released their brilliant debut EP ‘Sickening and Deplorable’ earlier this year via Hometown Records, will be bringing Scottish indie pop band Vistas along on the tour as joint headliners. Vistas said: “We can’t wait to get out and play some shows with the TOUTS lads, buzzing to visit some great cities and play our music to some new faces.”

With a stream of incredible support from industry tastemakers including over twenty plays on BBC Radio 1, Huw Stephens’ Tune of the Week, Apple Music’s Best of the Week, A List Alternative and Breaking Artists playlists, their debut EP ‘Sickening and Deplorable’ has certainly generated a buzz since its release this May.

This summer has seen TOUTS play shows across the UK and Ireland, including with Blossoms at the Castlefield Bowl in Manchester and an upcoming show with Kasabian at Custom House Square in Belfast. The band have also been chosen by BBC Introducing to perform at this year’s Reading and Leeds Festival.