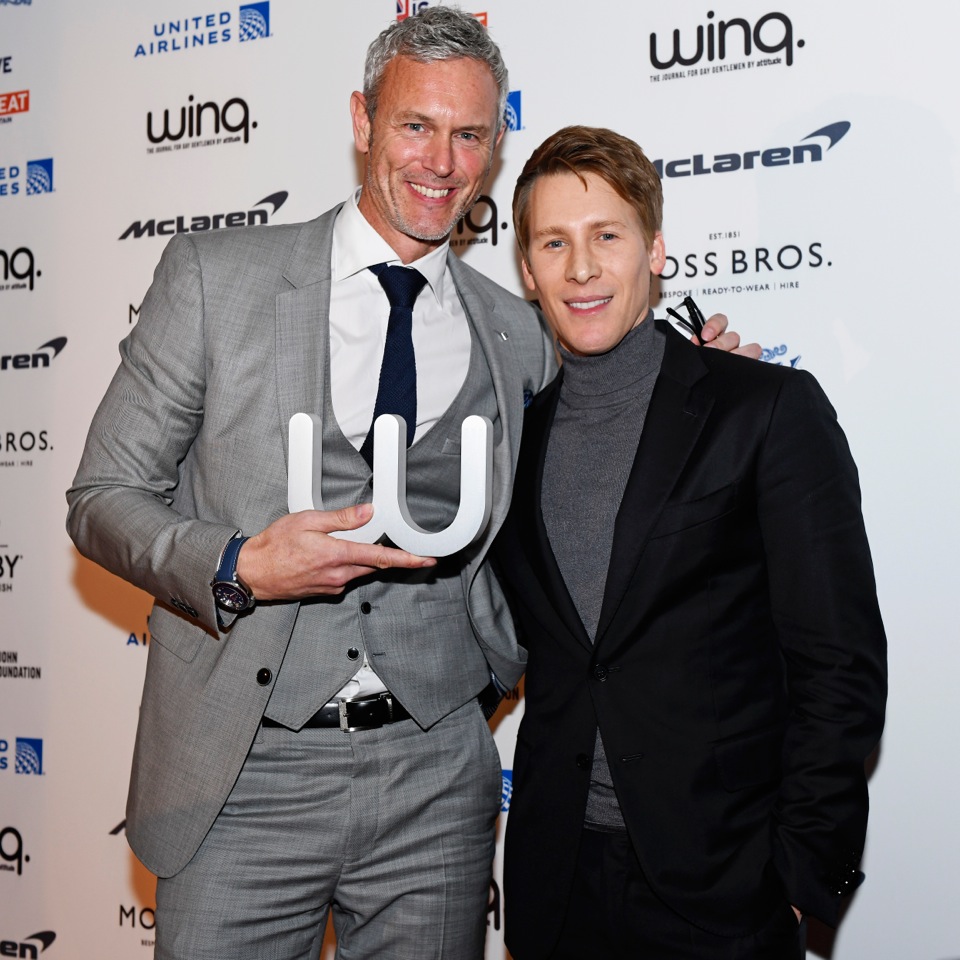 This afternoon, 6th December 2017, Winq magazine – the journal for gay gentlemen by Attitude – revealed its Men of the Year 2017, in association with United Airlines.

At an exclusive, invitation-only lunch to benefit the Elton John AIDS Foundation at the fabulous Rosewood London, hosted by BBC Breakfast’s Ben Thompson, the former World Champion swimmer Mark Foster was named Winq’s Man of the Year 2017, supported by Moss Bros. Mark, who came out only recently after a moment of clarity at October’s Attitude Awards where he presented to out and proud Olympian Greg Louganis, has given his world exclusive first magazine interview to Winq, in the all-new Winter edition.

Alongside Mark among Winq’s Men of the Year are the celebrated design duo Viktor & Rolf, Rolf Snoeren flew in from Amsterdam to collect the Style Award, supported by McLaren Automotive, Lord Browne, former CEO of BP and the only out gay man ever to lead a FTSE 100 company, who took home the Business Award, and funnyman Stephen K Amos, winner of the Comedy Award.

Further winners included the legend that is Marc Almond, who in his 60th year claims the Music Award supported by Slingsby Artisan Spirits, Man in the Orange Shirt writer Patrick Gale, named the Culture Award winner supported by Digby Fine English, and Gaycation’s Ian Daniel, who flies home to the USA with the Travel Award, supported by United Airlines.

The Elton John AIDS Foundation presented a special award to Evgeny Pisemsky, a Moscow-based director of Phoenix Plus, an HIV charity that is the only organisation in Russia focusing on the needs of MSM (men who have sex with men).

A bumper, 212-page Winter issue of Winq, featuring exclusive shoots and interviews with all of the Men of the Year, will be in stores and to download to phone or tablet from today, Wednesday 6th December.

“We have been delighted to present our third annual Winq Men of the Year lunch, in association with United Airlines, to benefit the Elton John AIDS Foundation. It’s the perfect opportunity to honour some very special people at a challenging time for the worldwide LGBT+ community, and send a message of love and support to those who are finding resistance in search of inclusivity and diversity.

“As with our sister title’s Attitude Awards and Attitude Pride Awards, we are proud to display our rainbow credentials to the world and provide a platform that sees no age, colour, race, religion or gender – just great individuals doing extraordinary work in being their best selves, whatever their sphere of excellence.

“We thank our friends at United Airlines for their support in making it all happen, and also our supporters at McLaren Automotive, Moss Bros, Digby Fine English, Slingsby Artisan Spirits and Rosewood London. Only with their help have we been able to raise more than £300,000 for the Elton John AIDS Foundation in the past five years, an organisation that is changing and saving lives.”

Launched in 2005, Winq magazine is Europe’s premium gay lifestyle publication – a brand operating out of London and Amsterdam and selling in two languages and 32 countries. Produced in print and digital formats, online and via live events, including the annual Men of the Year lunch and awards (now in their third year), Winq is published quarterly by the independent, boutique publisher Stream Publishing. It is the sister title to Attitude

The winner of the Winq Business Award was Chief Executive of BP for an incredible 41 years, during which he transformed the FTSE 100 business into one of the leading integrated oil and gas companies in the world. But in order to succeed in business, Lord Browne had to hide his sexuality from the world. In 2007 he was outed in a way that could have destroyed him, but he turned it into his finest hour, using the experience to write a book about LGBT+ business leadership that has helped change attitudes and inspired many others to be open about their sexuality. It’s down in no small part to Lord Browne that it’s no longer necessary for LGBT+ businesspeople to lead a double life.

On the crowded British comedy scene, Stephen K Amos stands out as a true original. Like many others, he grafted for years in pubs and clubs before taking his brand of feelgood comedy to the Edinburgh Festival Fringe, where it won acclaim and introduced him to a wider audience. But he’s always been outspoken about issues of race and inequality and one evening publicly outed himself as gay on stage. Overnight he became the spokesperson for black gay men in Britain. And although he feared he might become pigeonholed, his sexuality has only added another layer to his formidable comedy talent. These days he’s a familiar face on TV and regularly sells out stand-up shows around the world — a unique entertainer and a deserved winner of our Comedy Award.

The winner of our Culture Award is currently hard at work on his new book, a novel he describes as “very gay but quite niche”. Now niche might not be the first word that springs to mind when you think of Patrick Gale — this will be his 20th book and he became a best-selling author years ago — but gay certainly is. In the early 1980s, at a time when gay novelists were rarely out and seldom wrote about queer life, Patrick did. And over the years his work has introduced readers to characters from the full range of the LGBT+ spectrum. He recently wrote the script for the highly acclaimed Man in an Orange Shirt, part of the BBC’s Queer Britannia season, and has another two TV shows in the pipeline as well as a feature film. If we had an award for Most Productive Man of the Year he’d be a shoe-in, but the Culture Award suits him just as well.

While rates of HIV infection are falling all over the world, in Russia they’re soaring. One of the men on the frontline of the fight against this acceleration is Evgeny Pisemkiy. As Director of Programmes of Phoenix Plus, the only HIV organization in Russia to focus specifically on the needs of the LGBT+ community, he co-ordinates activities aiming to combat the stigma and ignorance around HIV. And he’s a man who’s shown immense bravery in his personal life, no easy thing in a country rife with institutionalised homophobia. These are just a few of the reasons why Evgeny Pisemskiy is the winner of the Elton John AIDS Foundation Award.

The winner of the Winq Music Award, Marc Almond, is an extraordinary man from Lancashire who, over nearly four decades, has sold an incredible 30 million records. Through various incarnations he’s managed to resist the pressures of the music business to conform, stay true to himself and maintain his integrity as an out gay man. He’s a singer who’s enjoyed great success both performing his own songs as well as reinterpreting other people’s, and this year he released Shadows and Reflections, a new album featuring orchestral arrangements of 1960s torch songs as well as two original compositions. It became his highest charting album as a solo artist – the perfect way to mark his 60th birthday year.

One of the fashion industry’s best known double acts, Viktor Horsting and Rolf Snoeren have built up a clothing empire since the early 1990s, gaining a reputation for embracing avant-garde design and experimenting with performance and theatre in their runway shows. 2018 marks their 25th anniversary as creative partners, a working relationship that has sought to blur the boundaries of fashion and art through both haute couture and ready-to-wear collections. Along the way, they’ve released three best-selling fragrances, and in 2016 were celebrated with a retrospective at the National Gallery of Victoria in Melbourne, Australia. They once said: “We are one brain, one person, one designer”, but to us, they’re just number one – and the winners of our Style Award.

As co-host of Viceland’s queer documentary series Gaycation, a show that travels the world to shine a light on the lives and struggles of LGBT+ people, Ian Daniel has demonstrated great empathy and a fierce passion for social justice. Alongside Ellen Page, he’s met both those who are risking their lives in the fight for equality and those who seek to obstruct it, in countries including Japan, France, Brazil, Ukraine and even his home country of the USA, where LGBT+ citizens face increasing challenges under the Trump administration. Gaycation’s guise as a travel show on one of the world’s biggest digital platforms allows it to educate viewers both gay and straight, and to change attitudes across the globe. Ian’s integral part in this earns him our Travel Award.

Man of the Year, supported by Moss Bros

With the publication of the winter edition issue of Winq, the first magazine to which he has given a ‘comoing out’ interview, our Man of the Year – Mark Foster – celebrates being the newest addition to the UK’s out and proud LGBT+ community. He’s also one of Britain’s most successful swimmers ever: an eight-times World Record holder, he was subsequently chosen as the flag-bearer for Team GB at the 2008 Beijing Olympics. Since his retirement that same year, he’s appeared on various TV shows, including Strictly Come Dancing, and is a regular commentator on swimming for the BBC. But all this time he’s been harbouring a secret – and concealing his sexuality from the public. And it’s for being brave enough to reveal it now, and for telling the moving story behind his decision to stay in the closet, that Mark Foster is being honoured as our Man of the Year.
06.12.2017