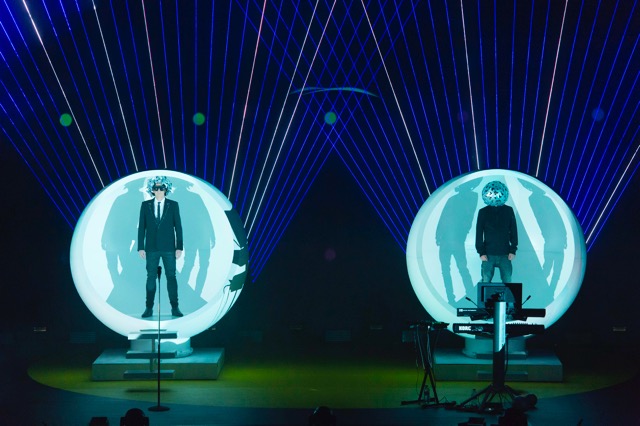 Today, 02 February, NME proudly announces Pet Shop Boys – the most successful duo in UK music history* – as the recipients of the illustrious NME Godlike Genius Award. The duo is confirmed to attend the ceremony to collect the award before bringing the evening to a close with a spectacular performance showcasing their greatest hits. The VO5 NME Awards 2017 take place on 15 February at London’s O2 Academy Brixton. A limited number of tickets are available for Pet Shop Boys fans here.

Pet Shop Boys, who released their 16th top ten album SUPER in 2016, have amassed over 50 million record sales worldwide. They have achieved 42 Top 30 singles in the UK including 22 Top 10 hits and four number ones. They have released thirteen studio albums, all of which have hit the UK Top 10 as well as album charts around the world. Though their legacy and influence remains unparalleled, Pet Shop Boys (Neil Tennant and Chris Lowe) continue to push the boundaries of their music and art to widespread critical and commercial acclaim.

Key accolades to date include three Ivor Novello Awards, as well as winning Song of the Decade 1985 – 1994 for ‘West End Girls’, as voted by six million BBC Radio 2 listeners in commemoration of the 50th anniversary of the Ivor Novello Awards. Pet Shop Boys also hold the position of #1 dance group and male artists in the history of the Billboard dance charts.

Their most recent album, 2016’s SUPER, entered the UK album charts at number three. Following its release the duo played a rapturous four-night sold-out residency at London’s Royal Opera House. Pet Shop Boys are set to take their awe-inspiring show – produced in collaboration with award-winning designer Es Devlin – on tour across the UK from February.

On presenting Pet Shop Boys with the Godlike Genius Award, NME editor-in-chief Mike Williams says: “For three decades, Neil Tennant and Chris Lowe have been pushing the boundaries of pop music, releasing a series of consistently excellent singles and albums and working to blur the boundaries between art, music and social commentary. Their influence on pop culture is undeniable and the list of artists they’ve worked with is a mini rock ’n’ roll hall of fame. Pet Shop Boys’ stage performances and festival shows are never anything short of spectacular, and we’re honoured that our latest Godlike Geniuses will grace the Brixton stage for an extra-special set of hits to close the VO5 NME Awards 2017.”

The prestigious NME Godlike Genius Award, now in its 23rd year, is a trophy reserved for only the greatest musical talent on the planet, celebrating those artists who have been trailblazers. Previous recipients of the accolade include Paul Weller, The Cure, Dave Grohl, Noel Gallagher, Johnny Marr, Blondie and, last year’s winners, Coldplay.

The nominees for this year’s VO5 NME Awards were revealed and celebrated at the Nikon Presents the NME Awards Nominations Party which saw Biffy Clyro perform an intimate acoustic set at London’s Omeara. Beyoncé leads the polls with a huge five nominations including Best Album, Hero of the Year, Music Moment of the Year, Best International Female (supported by VO5) and Best Video for Formation. The 1975, Skepta, Bastille and Christine and the Queens follow close behind with four nominations apiece, going head-to-head in key categories such as Best British Band (supported by Zig-Zag), Best Album (supported by HMV) and Best Track (supported by Red Stripe).

Renowned for tipping who will be the next big thing, the annual NME Awards Tour has famously featured the likes of the Arctic Monkeys, Coldplay, The Killers, Bloc Party, Florence and the Machine and many more. This year will see Blossoms headline the VO5 NME Awards Tour with hotly-tipped newcomers Cabbage and indie pop prodigy Rory Wynne also joining the bill. The VO5 NME Awards Tour 2017 kicks off in Keele on March 16. Tickets are on sale now, with some dates already sold out.

Tickets for the VO5 NME Awards 2017 are on sale at nme.com/tickets

VO5 NME Awards Tour date tickets can be purchased at: Nominees for key categories include:

‘The Life Of Pablo’ Kanye West

‘I Like It When You Sleep, For You Are So Beautiful Yet So Unaware of It’ The 1975

‘After The Afterparty’ Charli XCX

‘Tilted’ Christine and The Queens

Bring Me The Horizon

*According to the Guinness Book of Records